This Picture Is the Future of Russia's Military: Stealth Fighters and Drones 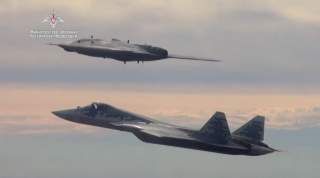