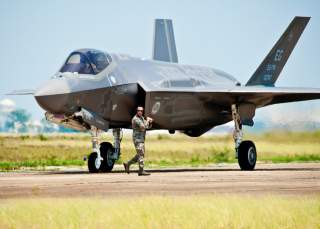 Key point: Russia has more than NATO to worry about.

As the F-35 Lightning II is currently the only fifth-generation stealth fighter on the market—unless you count the Su-57 sold by Russia, Poland’s chief potential adversary—there’s little doubt as to which aircraft is being referred to. In April 2019, the United States confirmed it was considering selling F-35s to Poland, as well as Greece, Romania, Singapore and Spain.

Previously, the Harpia program placed the F-35 had in competition with faster and more agile 4.5-generation Typhoon, Super Hornet and F-15X jet fighters. By canceling the competition, the Polish government reveals it believes the survivability advantages offered by the F-35’s stealthy radar cross-section and the abilities of its networkable sensors outweighed its shortcomings as a dogfighter or interceptor. One issue, for example, is that S-400 surface-to-air missiles batteries in the Russian exclave of Kaliningrad could theoretically interdict over half of Polish airspace.

However, Warsaw’s ditching of the competition may reflect concerns over the high accident rates of its aging MiG-29s, as well as decreasing F-35 unit costs to around $80 million per plane. Supposedly, Poland could begin operating F-35s as soon as 2024.

The F-35 would mark a new chapter in the PAF’s long and eventful history in aerial warriors—and mark a return to a pilot-centric paradigm air warfare the Poles were once famous for.

Prior to World War II, Poland dedicated only $2 per capita of defense spending to military aviation compared to $100 for the German Luftwaffe, then the most advanced air arm in the world. While the PAF fielded modern P.23 attack planes and P.37 bombers, its P.11 and older P.7 fighters were badly outdated—even more so than most other early-war Allied aircraft.

But despite these deficiencies, Polish pilots received an unusually good training program and acquired a romantic reputation for their bold maneuvers. Moreover, the Polish Air Force prepared for war with a network of secret satellite airfields from which Polish fighters could harry invaders.

When waves of Nazi bombers flew over the border on September 1, 1939, to bombard Warsaw and destroy the PAF on the ground, they blasted outdated or inactive aircraft while the PAF’s frontline squadrons escaped unscathed on the satellite fields. Nazi propaganda nonetheless falsely claimed to have destroyed the PAF in three days.

In fact, in the first six days of combat, Poles flying outdated P.11 shot down over 105 Nazi warplanes for the loss of 79 of their own. Meanwhile, according to Germany army accounts, Polish bombers inflicted enough damage to knockout 28 percent of the tanks of the 4th Panzer Division and delay the XCI Panzer Corps for two days.

Of course, the PAF could not overcome the Nazi’s overwhelming numerical, technical and geographic advantages—even more so when the Soviet Union invaded from the east to claim its share of Polish territory. Ultimately, hundreds of PAF pilots fled across the border to Romania, along with 150 aircraft which were promptly confiscated. However, many of the aviators then managed to escape to France, a historical ally of Poland, and served with the French Air Force.

As Panzer tanks rolled into the low countries, Polish pilots of the I/145 “Warsaw Squadron” received thirty-five pokey Caudron C.714 monoplanes. They were deemed so underpowered the French war minister promptly ordered the type withdrawn, but lacking alternative mounts, the Poles flew C.714s into battle anyway and shot down twelve to fifteen German bombers and fighters for nine losses in four days.

Once again, the Poles were forced to evacuate—this time to the United Kingdom. The British gave the Polish pilots an initially cool reception, requiring they swear an oath to King George, disallowing their use of national flags, uniformly ranking them as mere Pilot Officers, and assigning them British minders who doubted their discipline and seethed over their tendency to communicate in Polish over the radio during combat.

The 303 squadron particularly claimed an extraordinary 126 aerial kills for the loss of seven pilots, though historical research can verify only roughly half the kills. Even by that conservative figure, 303 was the highest scoring Hurricane unit of the Battle of Britain, and had the best kill-to-loss ratio, at 2.8:1.

Over the next five years, over nineteen thousand Polish personnel would serve in the RAF operating everything from Mustang fighters, Mosquito night-fighters, Lancaster heavy bombers and sub-hunting patrol planes. Such was their reputation, American writer Ralph Ingersoll observed: “they say the girls cannot resist the Poles, nor the Poles the girls."

However, the UK-based Polish fliers reception turned for the worse postwar, as their homeland had been reoccupied by a Red Army not keen on inviting the government-in-exile back.

Thus the postwar Polish Air Force was reformed drawing from Polish pilots who fought with the “Air Force of the Polish Army”—a unit organized by the Soviets in 1943 which had grown to sixteen thousand personnel by the end of the war. The force includes regiments of Yak fighters, Il-2 Shturmovik ground attack planes, Po-2 utility/night raiders, and speedy Pe-2 twin-engine bombers.

Equipped with Soviet fighters, many domestically manufactured in Poland itself, the PAF naturally adopted Soviet-style tactic centered around ground controllers.

While Ground Control Intercept is used by all modern air forces, the Soviet pilots relied on it to a greater degree. Relying on ground-based radars compensated for the weaker radars on many Soviet fighters, as well fit in with the Soviet Union’s more defensive aerial posture attempting to guard its vast aerial frontiers.

Reliance on GCI also reflected a broader tendency in Soviet military culture to minimize use of initiative by low-ranking frontline combatants in favor of decisions made by mid- and high-ranking officers. Though intended to control the chaos inherent to warfare, this policy could render Soviet units inflexible and slow to react to changing situations.

When the Polish Air Force was finally folded into NATO in 1999, Western pilots remarked upon how Polish pilots had been trained to rely upon ground control for routine combat tasks. While the PAF acquired multi-role F-16C/D jets with significantly better situational awareness and networking capabilities than their Soviet stablemates, its MiG-29s and Su-22s could not be easily upgraded to fit in with Western network-centric warfare.

Warsaw’s apparent decision to acquire F-35s will grant Polish pilots a new platform that not only has powerful sensors, but which can serve as a node, networking its sensor data to enhance friendly forces on ground and air. While the Lightning II may lack the flashy agility of 4.5-generation jets like the Typhoon one might associate with Polish military aviation’s dashing reputation, its ability to penetrate deeper into contested airspace may once again place Polish combat pilots back in the pilot’s seat.