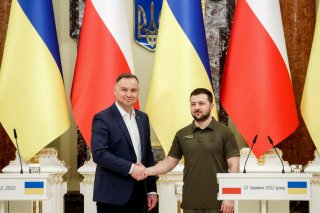 Polish president Andrej Duda visited Kyiv, the embattled capital of Ukraine, on Sunday to deliver an address to the Verkhovna Rada, the country’s parliament. Duda’s visit made him the first foreign head of state to address the body since the onset of Russia’s invasion on February 24.

During his remarks, which were well-received by the Ukrainian lawmakers in attendance, Duda praised Ukraine’s efforts to maintain its independence, claiming that the Verkhovna Rada represented “the heart of a free, independent, and democratic Ukraine,” according to Poland’s state-run PAP news agency.

“The free world has the face of Ukraine,” Duda said, praising the collective Western world’s actions in assisting the government in Kyiv while pressing it to do more. “Despite the great destruction, despite the terrible crimes, the great suffering that the Ukrainian nation experiences every day, the Russian invaders did not break you, they did not manage to do it.”

“I believe deeply that they will never succeed,” he added.

Ukrainian president Volodymyr Zelensky, who attended the speech, described it as a “historic moment” and claimed that the two countries’ relations had been mutually forged in opposition to “Russian aggression.”

In recent years, Poland’s government, led by the right-wing populist Law and Justice (PiS) party, has been criticized by the United States and the European Union for perceived authoritarian tendencies and restrictions on human rights, particularly LGBT rights. In spite of these concerns, however, Poland has emerged as one of Ukraine’s most prominent allies during the Russian invasion. The country has accepted more than three million Ukrainian refugees out of a pre-war population of roughly forty-four million, and Poland has also supplied the government in Kyiv with financial and military assistance. The country has also served as a transit hub for foreign fighters, including some Polish soldiers, entering Ukraine to fight on the side of the Ukrainian government.

Poland and Russia have long been at odds with each other. During the Second World War, Soviet officials executed tens of thousands of Polish officers and intellectuals at the Katyn Forest, and the country fell under Soviet orbit following the war’s conclusion. Since its independence, Poland’s foreign policy has been oriented toward further integration with Europe and away from Russia, and relations between the two countries remained poor prior to the Russian invasion. In mid-April, the Polish government repeated its accusation that the Kremlin had plotted the assassination of former president Lech Kaczynski in a mysterious plane crash.