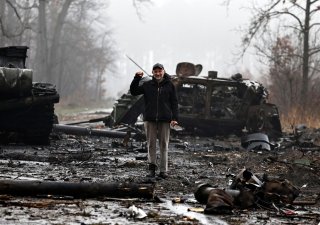 The visible morale problems among Russian troops cited in the earliest days of the country's invasion of Ukraine seem to be persisting and having a substantial impact.

While many specifics and details related to Russian morale problems have not been available due to security reasons and the challenges of verifying such information, Pentagon officials are clear that these problems are not going away.

A senior Pentagon official told reporters on March 31 that the United States has “continued to see unit cohesion issues, command-and-control problems, problems of faulty leadership. And certainly, we have continued to see, again, anecdotal evidence of poor morale and poor performance by troops on the battlefield. … We can't say with certainty that it's uniformly across all the forces that they have in Ukraine.”

Morale can significantly impact combat performance, and many observers have been struck by how surprisingly poor Russia’s morale has been. Not only did Russia seem unprepared and ill-equipped for the kind of mission they were embarking upon, but there have been many anecdotal reports that some Russian soldiers may simply not want to fight or kill Ukrainians. Pentagon officials have also observed significant tactical errors by Russian forces.

“This is an operation, an armed conflict on the scale that the Russians have not attempted in a very, very, very long time, on multiple lines of axis, with poor coordination between elements in subordinate commands, poor planning for logistics and sustainment,” the senior Pentagon official said.

Other Russian tactical problems identified by observers include ineffective command and control and little to no air-ground attack coordination or synergy. According to Lt. Gen. Ben Hodges (ret.), former commander of U.S. Army Europe, much of this can be understood in terms of a critical warfare dynamic: adaptability. Hodges told the National Interest that wars are won by the force that better “adapts” to unanticipated changes and developments as they emerge.

Yet another potential explanation of these issues may be that the Russian soldiers ordered into Ukraine were not actual trained soldiers but instead conscripts ordered to conduct a mission they had no prior awareness of and no preparation for.

The official also explained that there is “anecdotal evidence that [Russian leaders] haven't even been honest with their troops about what it is that they were about to do, and largely depending on conscripts to fight.”