Is Russia Improving Its Battlefield Communications in Ukraine? 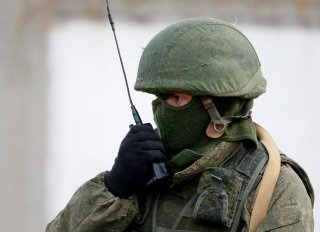 The war in Ukraine lends the impression that Russia is incapable of completing basic military tasks, such as setting up a working communications network to support its forces in combat. This is not without cause, as the first week of fighting revealed evidence that Russian troops were communicating with unencrypted radios, meaning that their transmissions could be intercepted and understood by anyone capable of using a high frequency (HF) radio. An arrest on March 15 indicated that a Ukrainian citizen operating out of his basement had been facilitating up to 1,000 mobile phone calls from Russian forces each day. Evidence of mobile phone use was further confirmed by reports from Ukrainian citizens whose phones had been stolen so that Russian soldiers could talk to their commanders and families. Some fighters also appeared to be carrying civilian walkie-talkies available to anyone with a credit card and access to the internet. With all this in mind, what should Russia’s tactical communications infrastructure look like based upon open-source reporting of Russia’s military modernization since 2008? There is value in examining this, as the existence of a successful communications network will facilitate the rest of Russia’s war.

At the tactical level, there are three primary systems to be aware of: the R-168 Akveduk and R-187 Azart families of tactical radios and the Strelets reconnaissance command and control system. The R-168 is a family of digital radios that comes in a number of forms, including very high and ultra-high frequencies, as well as an additional HF variant for long-range communications. Squad-level communications are provided by the R-168-0.1U VHF hand-held radios, which have a range of 1.2 kilometers. They can be used to transfer data at a rate of 16 kilobytes per second, which is mostly suitable for voice—as opposed to imagery—transfers. Armored vehicles such as the T-72B3 main battle tank are provided with the R-168-25VE radio, which has a communications range up to thirty-five kilometers. Command and control (C2) links from the company to the regimental level are provided by the R-168-25U-2, another VHF radio with a range of twenty-five to forty kilometers that can be found in vehicles such as the R-149BMR C2 and signals vehicle. The R-168 family of radios has been in service for some time and is likely the primary tactical radio for Russian forces. Its presence should be ubiquitous, and its capabilities are well understood.

The R-187 Azart is a family of very high and ultra-high frequency hand-held radios—often found with Russia’s top-tier infantry, such as the Spetsnaz formations within the airborne forces—that can communicate at ranges between four and forty kilometers. The R-187 is a capable family of software-defined radios that are typically part of Russia’s Ratnik soldier system for reconnaissance troops, which includes the Strelets reconnaissance C2 system. Strelets consist of a user terminal that varies in size and complexity depending on a soldier’s role and GPS or Global Navigation Satellite System positioning equipment. It is claimed to receive targeting information from radars and unmanned aerial vehicles (UAVs) like the Orlan-10. It has a communications range of around 1.5 kilometers, but each terminal is understood to act as a repeater that can extend this range. Short-range communications are conducted using the system’s organic Strelets, and tactical coordination for its operators can be facilitated by the R-187 family. For reaching air support, it can use the R-853-V2M radio station, which has a range of eight kilometers on the ground that can be extended to 200 kilometers when using a repeater station. However, there are alternative variants of Strelets such as the 83t215VR-5, which is designed to be used by satellite communications (SATCOM) operators equipped with the R-438M SATCOM system, providing communications over distances of 5,000 kilometers.

Once deployed and fully operational, these capabilities allow Russian front-line units to communicate with rear echelon forces and coordinate close air support and artillery fire in real-time. There is some evidence of SATCOM systems being deployed in the field, which may indicate that the Russians are gradually improving their communications network in Ukraine and reducing their reliance on mobile phones and unencrypted communications.

There is also evidence that the Russian communications network is beginning to function more effectively in support of targeting missions. The Russian Ministry of Defense has started to release footage of reconnaissance-fire engagements against Ukrainian forces. These videos provide evidence of real-time coordination of reconnaissance assets with artillery systems. Furthermore, limited evidence of reconnaissance-strike missions, which involve real-time target coordinate sharing but utilize cruise and ballistic missiles, are indicative of considerably improved coordination between echelons. This implies that the Russian network is now capable of supporting full-motion video transmissions from a UAV to its ground control center—and potentially to a command vehicle—so an engagement decision can be made on the battlefield. A further link in the cycle would be needed to transmit coordinates to strike units, whether they be artillery batteries or Iskander launchers hundreds of kilometers away. It also suggests that the communication architecture is robust enough to allow these decisions to be made in real-time.

Ultimately, Russian ground forces likely deploy a mix of radio types, just as they are deploying a mix of units, from Chechen fighters to troops that live closer to China than Ukraine. This, coupled with the sheer complexity of providing communications in an offensive operation at short notice, might account for some of the earlier complications with tactical communications. However, it is possible that as the war progresses, Russian forces will improve their tactical communications network and, in doing so, more effectively coordinate their actions against Ukrainian forces.