Power in the Pacific: Japan and Australia Ink a New Alliance 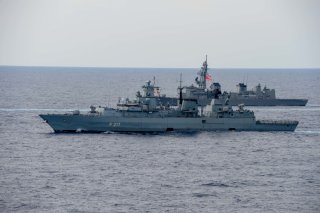 Japan and Australia are set to sign a security cooperation treaty on Thursday amid mounting regional tensions between China and its neighbors.

Called a Reciprocal Access Agreement (RAA), the treaty will make it easier for the two countries’ Armed Forces to coordinate military exercises. The RAA will also facilitate the faster deployment of Japanese and Australian military personnel and loosen restrictions on the transportation of weapons and equipment. Japanese prime minister Fumio Kishida described the agreement as “a landmark instrument which will elevate security cooperation between the nations to new heights.” The RAA is only Japan’s second Defense Pact, reflecting Tokyo’s newfound sense of urgency in seeking new security arrangements in the face of growing Chinese military assertiveness.

The treaty, which Australian prime minister Scott Morrison said “will underpin greater and more complex practical engagement between the Australian Defense Force and the Japanese Self-Defense Forces,” is seen as a move to check Beijing’s rising military and economic clout in the Asia-Pacific region. Japanese and Australian forces have regularly participated in joint and multilateral exercises in recent years; the two countries joined Germany, Canada, and the United States in late November for the ANNUALEX 2021 naval drills, which took place off Japan’s southern coast. Peter Jennings, executive director of the Australian Strategic Policy Institute, suggested to the Wall Street Journal that the RAA is partially a hedge against a possible future ebb in American commitments to the Asia-Pacific, as regional actors seemingly work to build overlapping alliances that do not directly involve the United States.

Chen Xiangmiao, an associate research fellow with the National Institute for South China Sea Studies, told the South China Morning Post that the RAA reflects Washington’s desire to further compartmentalize its web of regional alliances and partnerships. “The US is letting its allies take a bigger responsibility in security affairs in the region while countries like Japan are becoming active in playing a role in Washington’s Indo-Pacific strategy to counter China,” he said. “It will be more and more difficult for small countries in the region to maintain autonomy in foreign policy and they will eventually be forced to take sides between China and the US.” Beijing has not commented directly on the RAA as of the time of writing. Chinese foreign ministry spokesman Wang Wenbin instead said that such cooperation should serve the interests of peace “rather than targeting or undermining the interests of any third party.”