Precision Strike Missile: How the U.S. Army Plans to Sink a Navy 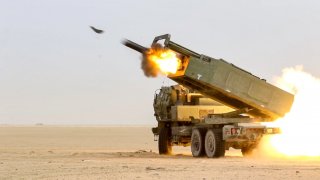 The U.S. Army will be able to target and destroy moving enemy ships at ranges out to 500 km by 2025 with its emerging, land-launched Precision Strike Missile (PrSM), a developing weapon intended to bring a new level of mid-range attack possibilities, precision and advanced targeting technology to the force.

While the weapon clearly has surface-to-surface applications for enemy targets such as air defenses, troop fortifications and armored vehicle columns, the PrSM is being configured with an advanced targeting multi-mode seeker engineered to bring new dimensions of targeting flexibility, to include maritime attack.

The new targeting seeker recently completed a “captive carry” test wherein it flew on board an aircraft against “representative targets”  in preparation for further testing and ultimate deployment.

“The first test was successful. Essentially, it gives us a bunch more sensors so we are connected to the air defense network which has a variety of very powerful, long-range sensors. We can acquire and attack more targets at longer range,” Brig. Gen. John Rafferty, Director, Long-Range Precision Fires Cross Functional Team, told The National Interest in an interview.

While many of the technical details of the new seeker are not available for security reasons, Rafferty explained, its added capacities do align with the Army’s modern concepts of Combined Arms Maneuver and the service’s heavily emphasized Multi-Domain Operations concept.

Rafferty said the development of the weapon is progressing very well,  in part due to successes accomplished by its maker Lockheed Martin which helped the Army identify the base missile design one year earlier than expected.

“We have been asking for help from Congress to complete that acceleration and complete by 2025,” Raffery said.

The emergence of the weapon, and its next-generation targeting technology, brings new tactical possibilities for an Army increasingly looking to out-range and enemy and destroy targets from safer stand-off ranges. The PrSM could, for instance, be successful against enemy radar, air defenses or even aircraft carriers hundreds of miles off shore.

It may not quite have the 900-nautical mile range of a U.S. Navy Tomahawk, however it may draw upon targeting technologies with an impact not unlike new Tomahawk variants. The Navy’s Maritime Tomahawk, for instance, can now change course in flight to attack moving targets at sea, a new possibility typically not considered for a weapon used to destroy “fixed” enemy targets. Interestingly, the Army is now developing a land-fired variant of the Tomahawk.

The particular new targeting seeker will, depending of course on its particular technical composition, might give commanders an ability to hit moving armored columns and troop concentrations on the move.

While no information regarding the exact technologies of the seeker are available, multi-mode seekers on other weapons often blend various targeting technologies into a single application, often merging things like RF guidance, laser spotting or infrared sensing.

The thrust of the new seeker, it seems apparent, is in part grounded in a concept of networking, as Rafferty seemed to indicate it might enable more multi-domain targeting. Receiving targeting input from drones, aircraft, forward positioned controllers or even ocean assets adds an entirely new attack scope to the weapon.