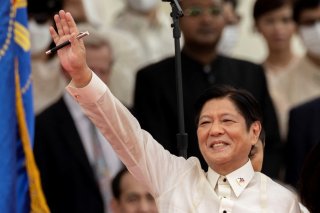 Ferdinand “Bongbong” Marcos Jr., the son of former Philippine dictator Ferdinand Marcos, was sworn into office on Thursday as the seventeenth president of the Philippines, roughly thirty-six years after his father was forced from office and into exile in a popular revolution.

Marcos Jr., aged sixty-four, assumed office after his landslide victory in the Philippines’ presidential race in May 2022. The younger Marcos succeeds outgoing President Rodrigo Duterte, who received international criticism for his support for an extrajudicial drug war but who has remained consistently popular among the Philippine public.

In his inauguration speech, Marcos, who received Duterte’s endorsement in the run-up to the presidential vote, thanked the country for delivering him “the biggest electoral mandate in the history of Philippine democracy.”

“You will not be disappointed, so do not be afraid,” he said, vowing that he would rule in the public interest and deliver policies benefiting all classes of Philippine society. He also praised his father’s rule, claiming that he had done what had been needed to develop the country following its independence in 1946.

“He [Marcos Sr.] got it done sometimes with the needed support, sometimes without,” Marcos said. “So will it be with his son. You will get no excuses from me.”

Marcos also vowed that he would improve the Philippines’ infrastructure, food sufficiency, waste management, and energy sector. He claimed that his government would do more to support Filipinos abroad where an estimated ten percent of the population works and provides crucial support to the country’s economy through remittances.

The new president was accompanied at his inauguration by his sister Imee, a senator, and his mother Imelda, the wife of the elder Marcos, who accompanied him into exile in 1986 and spent decades attempting to rehabilitate the Marcos family’s image.

The elder Marcos ruled the Philippines from 1965, following his election in a free and fair election, until the “People Power Revolution” in 1986. In 1972, Marcos placed the country under martial law, dramatically expanding his personal powers; thousands of Philippine dissidents were jailed or killed during this period, and billions disappeared from the state treasury, much of it thought to have been embezzled by Marcos and his inner circle.

The Marcos family, estimated to have taken $5 to $10 billion, has consistently rejected accusations of theft.