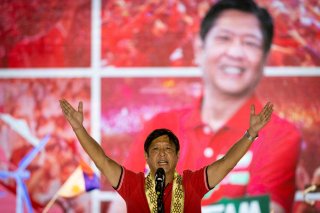 Ferdinand “Bongbong” Marcos Jr., the son of former Philippine dictator Ferdinand Marcos, secured a decisive victory in the country’s presidential election on Monday—marking a major restoration of power for the family that was overthrown in a popular uprising in 1986.

Marcos is estimated to have won roughly 58 percent of the vote—a share nearly 30 points higher than his nearest competitor, current Vice President Leni Robredo, who received 30 percent of the vote. The field was split between ten candidates, including Manila mayor Isko Robredo and champion boxer Manny Pacquiao.

Marcos secured the victory in large part due to his alliance with Duterte, who endorsed him and campaigned for him in the weeks leading up to the election. Sara Duterte, Duterte’s daughter, is Marcos’ nominee for vice president. Although the Philippine electoral system provides for separate elections for the president and vice president, Duterte is predicted to win her election by an even wider margin. The Philippines’ electoral system is first-past-the-post, meaning that whoever receives the highest share of the vote is elected without the need for a runoff election.

Marcos was the nominee of the Federal Party of the Philippines, a federalist political party allied with Duterte. Marcos largely declined to lay out his agenda on the campaign trail, although he promised that he would incentivize an economic recovery from the COVID-19 pandemic through government spending on infrastructure projects. The Philippines’ infrastructure is usually rated among the least developed in East Asia, meaning that there is no shortage of projects for him to choose from. However, Marcos’ opponents have warned that he might divert government construction contracts to his political allies, a tactic favored by his father during his rule of the Philippines from 1965 to 1986.

A second question concerning Marcos’ administration is its position in the political and economic competition between China and the United States, both of which have extensive ties to the Philippine economy. Although the Philippines has historically enjoyed closer ties to the United States, China has made major inroads in the country through low-interest loans, and U.S.-Philippine ties soured under Duterte, who clashed with the United States over its disapproval of his extrajudicial anti-drug campaign and increasing authoritarian tendencies. Relations could deteriorate further under Marcos, who is wanted in the United States for failing to pay a court-ordered fine to human rights groups persecuted under the rule of his father.