President Trump Declares After Senate Impeachment Acquittal "This Should Never Happen to Another President." 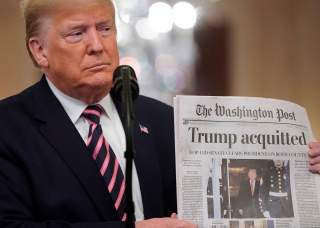 President Donald Trump, surrounded by his cabinet, political allies, and requisite media, gave an hour speech this afternoon at the White House concerning the senate vote yesterday to acquit him on two articles of impeachment.

“We had the witch hunt. It started from the day we came down the elevator [escalator], myself and our future first lady,” the President began, describing efforts by his political opponents to stifle his administration. “It never really stopped. We’ve been going through this now for over three years. It was evil. It was corrupt. It was dirty cops; it was leakers and liars.”

“This should never happen to another president. Ever. I don’t know that other presidents would have been able to take it,” Trump continued. He is the third President to be impeached by the House of Representatives and acquitted by the senate, following Andrew Johnson in 1868 and Bill Clinton in 1998.

“If this happened to President Obama, a lot of people would have been in jail for a long time already. Many, many years,” Trump said, in what might have been a veiled threat of legal action for any of his opponents who infringed on the law. As a candidate in 2016 Trump was criticized for popularizing the rally chant “Lock her up!” against his then-opponent, former secretary of state Hillary Clinton.

There is currently an ongoing criminal investigation led by Connecticut District Attorney John Durham into the origins of the 2016 FBI probe, which in 2017 would evolve into the appointment of Robert Mueller as a special prosecutor. “It was all bullshit,” Trump said, describing the “Russia Russia Russia” allegations.

“I’ve done things wrong in my life, I will admit. Not purposely, but I’ve done things wrong. But this is what the end result is,” said the president, in his most triumphant moment of the speech. He proceeded to hold up the front page of The Washington Post, with the headline “TRUMP ACQUITTED” spread across it. He handed it to his wife Melania, saying “You can take that home honey, maybe we’ll frame it. It’s the only good headline I’ve ever had in The Washington Post.”

More than three-quarters of the speech was spent thanking party stalwarts who had stood by the President's side during the controversy, because “you develop friendships when you’re in battle and war.”

Early on Trump thanked Senate Majority Leader Mitch McConnell of Kentucky, who worked with the White House to whip votes and manage the senate trial. “Mitch, he stayed there right from the beginning. He never changed. And Mitch McConnell, I want to tell you, you did a fantastic job,” Trump said to his colleague.

While jovially telling anecdotes about friends, Trump also had words for the people who had supported his impeachment. He instructed Senator Mike Lee to “say hello to the people of Utah. And tell them I’m sorry about Mitt Romney.” Romney was the only Republican in either chamber to vote for impeachment and removal. Afterwards, Trump said Romney’s poll numbers “went down big.”

The harshest words were reserved for House Democrats. “[Intelligence Committee Chair] Adam Schiff is a vicious, horrible person. [Speaker of the House] Nancy Pelosi is a horrible person. And she wanted to impeach a long time ago. When she said, ‘I pray for the president,’ she may pray, but she prays for the opposite. I doubt she prays at all.”