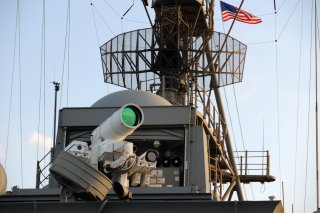 Whenever you hear a military general, particularly one from the global north, say “modernization,” it is understood that they are referring to the development and integration of next-generation weapons. Directed Energy Weapons (DEWs) are part of the same modernization scheme as the lasers integrated on U.S Navy destroyers, and research is underway to mount them on U.S. Air Force jets. The work is in its early stages, and it could still take decades before DEWs can completely replace existing instruments of war and turn science fiction into reality. Satellites are particularly vulnerable to a directed pulse of energy, which could potentially leave them inoperable. The multi-dimensional benefits of DEWs make them an interesting domain to explore and, at the same time, dangerous military assets for adversaries to acquire. However, there is another side to DEWs. Directed energy is increasingly being used against human targets, which warrants much more deliberation and consensus than its use against inanimate military hardware does.

For anyone with an iota of topographical knowledge, Havana and the Himalayas couldn’t be more different. Yet, two very different regions have been, apparently, connected by an ominous turn of events, one that is potent enough to unleash a new global arms race. What started in 2016 with symptoms of vertigo, headache, buzzing ears, and psychological distress for some U.S. diplomats in Havana may have culminated in the Chinese People Liberation Army’s “beautiful solution” against the Indian Army in the Himalayas. While the Indian Army denies that microwave radiation was used against its soldiers in 2020, and the cause of “Havana Syndrome” has not yet been categorically identified, directed energy is the most plausible theory. CIA Director William Burns also personally believes them to be “attacks” and not incidents, despite his agency officially determining that the symptoms were not the result of a deliberate campaign by a hostile power.

The attacks on U.S. and Indian personnel are just the latest instance of DEWs being directed toward human targets. The United States has possessed a similar system, known as Active Denial Technology, since 2001. Even after deploying it in Afghanistan, an active warzone, it was never used because of “bad publicity.” All the subsequent requests for its usage have been denied in the United States on similar grounds. Ironically, it is U.S. diplomats and spies who have become the targets of the same directed source of energy, inflicting physical and psychological harm in Havana, Guangzhou, and Vienna. Subsequent U.S. administrations have not allowed DEWs to be deployed against human targets. But all the leaders across the globe may not be as considerate, and even the United States might not hold on to altruism for much longer.

Southern Asia is a notoriously hostile region where the domino effect of weapon proliferation is real, as indicated by the nuclear arms race between China, India, and, eventually, Pakistan. Havana Syndrome was the only plausible instance of DEW use until the Indo-China Galwan Valley skirmishes in 2020. Since it was China that allegedly set the precedent for the use of DEWs in a conflict, even if the claim was a gimmick, the arms race has already begun. It may be on the drawing boards or in the prototype stage for countries that did not possess DEWs initially, but we have to assume that the game is on. And one thing we know that follows—as seen in the history of nuclear proliferation—is that technology only gets more sophisticated and more lethal from this point onwards.

Secretary of State Antony Blinken has said that an urgent priority for the United States is tackling Havana Syndrome and getting to the bottom of these mysterious cases. The truth is that it should be the most urgent priority on the agenda for international security. In a world that is governed by realpolitik, it would be naïve to think that countries could be stopped from developing DEWs. These weapons present a plausible look at future warfare. But there must be a consensus on the limits of their usage against human targets. Yes, the alleged DEW attacks so far do not indicate that these are lethal weapons, but a coordinated effort is needed to ensure that it stays that way. At a time when countries direly need to cooperate on the pressing issues of pandemics, poverty, and terrorism, another arms race is the last thing the world needs. Nuclear proliferation has taught us that disarmament is practically impossible if an arms race is not proactively tackled. The use of DEWs against human targets needs to be taken care of just as the world took on biological and chemical weapons.

Akash Shah works as a Research Officer at the Strategic Vision Institute in Islamabad, Pakistan. His work focuses on developments and Militarization in Outer Space.