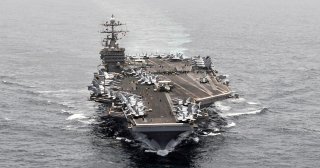 One of the United States’ most powerful surface vessels recently finished a significant deployment at a time of increased tensions due to Russia’s ongoing invasion of Ukraine. The U.S. Navy’s USS Harry S. Truman sailed over 65,000 nautical miles and conducted “enhanced air policing missions, dual and tri-carrier operations, and the NATO-led vigilance activities Neptune Shield 22 and Neptune Strike 22,” a U.S. Navy statement explained.

The U.S. Navy statement also highlighted the USS Harry S. Truman’s collaboration with NATO allies in Europe. “Together with CVW 1, Truman demonstrated the Navy's continuing regional commitment to the U.S. European Command (EUCOM) area of responsibility, the NATO Alliance and our regional partners. Truman hosted more than 400 guests, including political and military leaders from more than 10 allied and partner nations.”

The statement also added that the aircraft carrier “had the opportunity to participate in numerous training exercises and activities, integrating seamlessly with NATO Allies and partners with a focus on interoperability operations. The strike group demonstrated the enduring partnership with the NATO alliance, displaying our commitment to deterring aggression while working alongside partner and ally nations, further bolstering NATO bonds.”

“This has been an outstanding deployment by every measure due to the expertise and professionalism of our Sailors,” said Capt. Gavin Duff, Truman’s commanding officer. “This deployment was a first of its kind for nearly all of us onboard. I am immensely proud of the tenacity, skill and commitment this crew displayed to our Allies, partners and our own leadership. These Sailors are the soul of this ship, and I can think of no greater honor than to be part of this team.”

Though the North Atlantic Treaty Organization lost some of its raison d'être following the end of the Cold War, Russia’s invasion of Ukraine has rejuvenated the alliance. NATO appears set to welcome the accession of Finland and Sweden soon.

“The Truman and our embarked air wing are the central pillar of the strike group,” said Rear Adm. Paul Spedero Jr., commander, Carrier Strike Group (CSG) 8. “The carrier isn’t just a weapon of war, it is a symbol of American commitment and attention – one that has been focused on reassuring our NATO Allies and other European partners of our commitment to peace, stability, and cooperation. The Sailors of Truman and Carrier Air Wing 1 have proven our nation’s resolve through their professionalism and dedication.”