Production of the British Challenger 3 Tank Has Begun 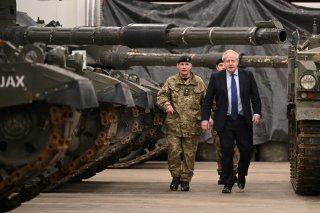 In a press release, the United Kingdom’s Ministry of Defence announced that the British Army is getting ready to start building the Challenger 3 tank.

The Challenger 3 program is part of an £800 million contract granted to the joint Rheinmetall BAE Systems Land (RBSL) venture. Ultimately, the program aims to deliver 148 Challenger 3 tanks to the British Army.

British defence procurement minister Jeremey Quin explained that the “Challenger 3 tanks will be at the forefront of the British Army’s ground force deterrent against our adversaries. They will be equipped with the latest digital enhancements and weaponry, providing support and reassurance to our allies.”

Though the press release was somewhat light on details, several interesting aspects of the new tank hint at the Challenger 3’s capabilities. The tank will use “high-velocity” ammunition that will have increased velocity and range, though additional details are not available.

The tank will also opt for a 120-millimeter smoothbore gun that can fire digitally-programmed ammunition—a considerable departure from previous British tank guns, which opted for a rifled gun barrel. The smoothbore option will put British tanks in line with most other 120mm NATO tanks, as the Challenger 3 will be able to fire NATO-standard ammunition.

Interestingly, the announcement explains that the tank’s “versatile turret can be fitted to the tanks of allies and global partners.” However, it is unclear if any British allies will opt into the Challenger 3 turret program.

The tank will also have a new “engine cooling system and suspension” that will improve the tank’s accuracy while on the move. In addition, the Challenger 3 will be equipped with a “new automatic target detection and tracking system to identify threats” and enhanced cameras and imaging systems.

Still, with the uncertain military situation in Europe in the wake of Russia’s invasion of Ukraine, it is possible that the British government will expedite the Challenger 3 upgrade.