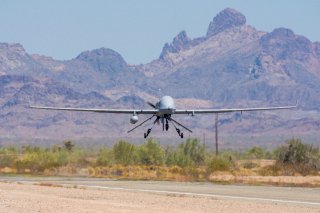 The Army is preparing for the third year of its Project Convergence “campaign of learning,” now reshaping combined arms maneuver paradigms, introducing new tactics, and shortening “sensor-to-shooter” times from minutes down to seconds.

Beginning in 2020, Project Convergence demonstrated something the Army has spent decades trying to accomplish—networking multiple manned and unmanned nodes across a distributed, multi-domain force. Forward scouting mini-drones, called air-launched effects, were able to find targets and instantly relay specifics across the force to larger drones, helicopters, ground-based Artificial Intelligence systems, and other weapons.

The concept is to gather and analyze pools of otherwise disparate sensor data, perform near real-time analytics on the data with the AI-enabled Firestorm system, and pair targeting details with weapons systems. This process, architects of Project Convergence have explained, could traditionally take twenty minutes, as data needs to be transmitted, analyzed, organized, and then fed to human decisionmakers. Now, that process has been reduced to around twenty seconds, essentially revolutionizing the ability of an offensive attack force to implement high-tempo, networked, and AI-empowered combined arms maneuvers.

During the initial exercise at Yuma Proving Grounds, satellites, manned platforms, and mini-drones gathered and transmitted targeting specifics to an AI-capable computer system able to analyze massive volumes of incoming data in seconds and make key determinations related to the threat and the optimal weapon to use against the target.

Building on this success, the Army took Project Convergence 2021 to a new level of connectivity by demonstrating advanced applications of cross-domain networking between Army, Navy, and Air Force technologies. In one instance, Marine Corps F-35B fighters were able to share real-time targeting and intelligence data with dismounted ground troops, enabling new dimensions of multi-domain combat operations.

Army Maj. Gen. John Rafferty, director of the Long Range Precision Fires Cross-Functional Team, told the National Interest that developments in Project Convergence 2021 moved the service much closer to the highly prioritized aims of the Pentagon’s multi-service Joint All-Domain Command and Control (JADC2) initiative. The idea is to attack at the “speed of relevance” and integrate otherwise disparate pools of data and incoming sensor information. The faster that data can be shared and analyzed across multiple domains, the sooner an attacking force can get in front of or inside of an enemy’s decision-making cycle and prevail in battle. Project Convergence represents the Army’s contribution to JADC2 and seeks to bring the Pentagon’s multi-service joint-warfare concept to fruition.

After expanding Project Convergence to incorporate other services beyond the Army, the Army is now planning to integrate a number of allied partners into its 2022 experiment.