From Proxies to Cyber Attacks: Here Are the Ways Iran Could Fight America 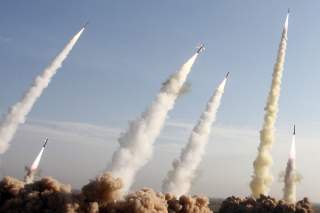 Key point: Iran has several options to up the pressure or cause outright damage to America and its allies.

Donald Trump has refused to certify the Iran nuclear deal and tensions are rising. What will Tehran do?

There are a ton of options available to Iran, and it’s impossible to know exactly which ones it will choose. Still, there are probably two broad strategies it will consider. In the first instance, Tehran might tailor its actions to punish the United States and certain allies like Israel and Saudi Arabia, while trying to avoid hurting countries in Europe that opposed Trump’s decision. Iran might take a less discriminate approach in the hope that the world will ultimately blame the United States for pulling out of the agreement in the first place.

With this in mind, here’s four possible ways that Iran might retaliate.

It would be logically coherent for Iran is to retaliate to the United States scuttling the agreement by ramping up its nuclear program, perhaps beyond the levels it achieved before the deal was in place. If it decides on this approach, Tehran will most likely want to do so without overtly declaring it is building nuclear weapons.

Iran could best achieve this objective by announcing that it is building nuclear submarines. This is something that Iranian officials threatened back in 2012, and in December of last year—after the United States passed new non-nuclear sanctions—President Hassan Rouhani ordered his country’s scientists to begin “planning the design and production of nuclear fuel and reactors for maritime transport.”

The benefit of this policy is it gives Iran cover to overcome the largest obstacle to building a nuclear weapon: obtaining fissile material. As I recently discussed in relation to South Korea, the nuclear reactors that power submarines typically use uranium enriched to 90 percent levels, which is what is used in nuclear bombs. Thus, Iran can acquire the fissile material needed for a bomb while maintaining plausible deniability that it is building one.

This strategy would not be without risks, however. For starters, it would put immense pressure on Donald Trump and Benjamin Netanyahu to authorize airstrikes against Iran’s nuclear facilities. Moreover, this strategy would risk alienating the European powers, as well as Russia and China, which opposed the U.S. violation of the agreement. As alluded to above, it’s possible that other countries would blame the United States for Iran’s nuclear expansion since it was the one that violated the agreement.

It is also worth noting that Iran has pursued a similar strategy in the past. As the international community ramped up sanctions in the years before Iran and the P5+1 entered into negotiations, Tehran undertook a nuclear buildup as a way of coercing the United States into abandoning its approach.

If Iran was intent on not alienating the non-U.S. members of the P5+1, it might abide by the terms of the nuclear agreement while using a more tailored approach to punish the United States. One such approach would be to use proxy forces to attack U.S. troops currently operating in Iraq, Syria and Afghanistan.

Once again, this strategy would not be without precedent: following the U.S. invasions of Afghanistan and Iraq in 2001 and 2003 respectively, the Iranian Quds Forces waged a vicious covert war against American troops in those countries. According to some estimates, Iran is responsible for the death of some 500 U.S. troops in those two countries. Perhaps the most lethal tactic Tehran used was providing explosively formed penetrators (EFPs) to its proxies in Iraq.

The New York Times has called EFP’s “the single most lethal weapon American forces faced in Iraq.” As it explained: “What makes EFP’s so deadly is that they form ‘slugs’ at detonation that maintain their shape over distances of over 100 yards or more, traveling at speeds of nearly a mile per second. This allowed insurgent forces to hide these weapons far from the road, better camouflaging them and making them far more deadly. In some I.E.D. factories, American forces found EFP’s camouflaged to look like trash or rocks.”

Even when the United States had well over 100,000 troops in Iraq, it struggled mightily to protect its troops from Iranian-backed attacks. Now, a much smaller and more vulnerable set of forces are operating in Syria, Iraq, and Afghanistan. These troops are effectively hostages in the nuclear deal saga, serving as easy targets for Iranian retaliation.

Although Iran might want to avoid attacking U.S. allies that support the nuclear accord, it would not hesitate to target countries like Israel and Saudi Arabia that have tried to undermine the deal at every step. Tehran could best target these countries by providing advanced weapons to the Houthis in Yemen or Hezbollah in Lebanon.

For example, Iran could provide these forces with its Emad missile. The Emad is Iran’s first missile to feature a maneuverable reentry vehicle (MARV), which allows the missile to evade most missile defenses while also making it extremely accurate. The Houthis could used a Marv missile to target Saudi ports or energy installations. Hezbollah could use them to make good on its threats to attack Israel’s chemical and nuclear facilities. This would almost certainly lead to a another war between Israel and Hezbollah, which would benefit Iran by refocusing the Sunni Arab world’s anger on Israel and away from the Assad regime in Syria.

When the United States began imposing sanctions on Iran’s oil and financial institutions, Tehran responded in kind. Specifically, Iranian hackers began targeting America’s own financial institutions as well as international oil companies like Saudi Aramco. According to a September report in Politico, Iranian hackers stopped attacking U.S. targets once negotiations over the nuclear program began in 2013.

This restraint would almost certainly end if the United States violated the nuclear agreement by reimposing sanctions, and Iran could almost certainly launch more sophisticated attacks than it used prior to 2013. For one thing, Iranian cyber warriors have demonstrated greater capabilities in more recent attacks against their Gulf rivals. Moreover, while Iran stopped launching cyber attacks against the United States, it almost certainly continued to penetrate U.S. networks for espionage purposes and to prepare for future hostilities. Once in these networks, it is merely a matter of policy whether it launches attacks or continues to lie in wait. Thus, as one cyber expert told Politico: “I personally think they’ll double down their efforts and we’ll start to see a lot more attacks…. And we’ll probably see a lot more sophisticated attacks.”

Attacking U.S. financial institutions and energy targets would have the benefit of being reciprocal since the U.S. sanctions would be targeting these sectors in Iran. The recent past suggests this is how Iran likes to retaliate to perceived aggressions. Besides the aforementioned hacks against U.S. and Saudi companies, Iran responded to an Israeli campaign to assassinate its nuclear scientists by using the same exact tactics to target Israeli diplomats in third countries.

While far from comprehensive, these are some of the options that are available to Iran. It’s worth noting that Tehran’s retaliation might not be limited to any one action. It’s easy to imagine Iran launching a nuclear buildup while also initiating cyber attacks and providing advanced weapons to proxies, for example.

Zachary Keck (@ZacharyKeck) is a former managing editor of The National Interest. This first appeared in October 2017.