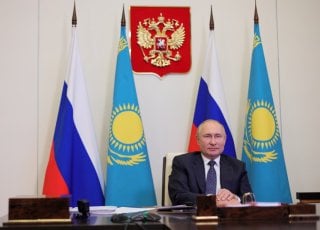 Russian president Vladimir Putin claimed on Monday that Russian troops had helped save Kazakhstan from a “foreign-backed invasion,” according to Reuters.

In his remarks to the Collective Security Treaty Organization (CSTO), the Eurasian military alliance that oversaw the Russian-led international deployment in support of the Kazakh government, Putin claimed that the mission had helped to “prevent the undermining of the foundations of the state” and restored law and order within the country.

The Russian leader also claimed that the international mission would remain in Kazakhstan “for a limited time” in order to ensure long-lasting stability, although he did not specify a predicted withdrawal date.

Putin also appeared to draw a connection between Kazakhstan’s stability and Russia’s, claiming that by defeating a “color revolution” in Kazakhstan, Russia’s own security had been preserved.

Russia “will not allow the situation to be rocked at home,” Putin said. “We understand [that] the events in Kazakhstan are not the first, and far from the last, attempt to interfere in the internal affairs of our states from the outside,” he added.

Putin’s remarks were supported by Kazakh president Kassym-Jomart Tokayev, who requested a CSTO intervention after Kazakh security forces failed to contain several days of escalating protests. He suggested that the protests had been instigated by unnamed outside forces and argued that protesters were “terrorists” engaged in a “coup d’etat” attempt.

Nearly 6,000 Kazakhs have been arrested and around 2,000 civilians have been injured since the start of the protests. 164 civilians have reportedly died in clashes with security forces so far, according to Reuters.

The United States has taken a relatively neutral position on the protests in Kazakhstan. The State Department “condemn[ed] acts of violence and destruction of property” but also asked “all Kazakhstanis to respect and defend constitutional institutions, human rights, and media freedom” and requested a resumption of internet service in the country.

Secretary of State Antony Blinken later expressed reservations about Tokayev’s decision to invite Russian troops to help maintain order, acerbically noting that “once Russians are in your house, it’s sometimes very difficult to get them to leave.” The Russian Foreign Ministry described Blinken’s comment as “typically offensive.”

Although the protests did not succeed in toppling the Kazakh government, Tokayev announced that the gas subsidy that had triggered the violence would remain in effect for six months. He also reshuffled his cabinet and pushed Nursultan Nazarbayev, his predecessor as president who had remained on the country’s Security Council, firmly into retirement.