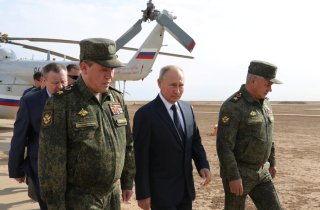 Russian leader Vladimir Putin announced on Wednesday that Russia would require countries regarded by the Kremlin as “unfriendly” to pay for oil and gas imports in rubles rather than in Western currencies. The move was characterized by Western economists as an attempt to artificially increase the exchange rate of Russia’s ailing currency.

In a meeting with Russian lawmakers, Putin framed the move as one of distrust in Western currencies. Russia’s overseas stockpiles of dollars, euros, and other currencies have been frozen in the West, preventing their use by the Kremlin. The Russian leader suggested that this problem could be circumvented by demanding the use of rubles rather than U.S. dollars, the international standard.

“A number of Western countries made [an] illegitimate decision on the so-called freezing of … Russian assets, effectively drawing a line over [the] reliability of their currencies, undermining the trust for those currencies,” Putin told lawmakers.

“It makes no sense whatsoever to supply our goods to the European Union [and] the United States and receive payment in dollars, euros, and a number of other currencies,” he added. It is not clear why Putin suggested that Russia would export to the United States, which has banned the import of Russian energy.

Putin did not specify when the policy would take effect, but he told the Russian central bank to establish procedures for countries to buy rubles within Russia. In effect, requiring the purchase of Russian energy in rubles means that importers must exchange Western currencies for rubles with Russia’s central bank and use the rubles to pay for the energy—essentially leaving the same fundamental exchange, Western currency for Russian oil, intact, but stimulating demand for the ruble. However, because most “unfriendly” countries targeted by this restriction have sanctioned the Russian central bank, it is not clear how such an exchange could take place.

The ruble has declined precipitously in value since the onset of Russia’s invasion of Ukraine on February 24. In the aftermath of the invasion, characterized by the Kremlin as a “special military operation,” heavy Western sanctions caused the ruble to roughly halve in value, sending its value from 75 per dollar to around 150. The currency has since recovered some of its value, trading on Wednesday at roughly 95 per dollar.

Russian gas importers, including Germany, have accused the Russian government of violating pre-war contracts, which often stipulate that payments be conducted at an established rate in one currency. German economy minister Robert Habeck suggested that the announcement was further evidence that Russia could not be relied on as a stable trading partner, adding that Berlin would discuss the matter with other importers.