Putin Is Desperate: Can a Draft Save Russia’s War in Ukraine? 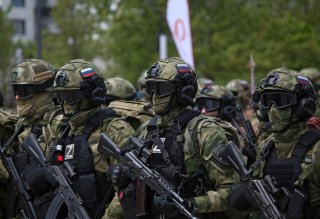 Russia’s announcement that it is calling up as many as 300,000 reservists to support its military operations in Ukraine does not appear to be causing grave concern or surprise among military leaders at the Pentagon. It may not end up impacting Ukrainian forces much either.

While the topline number sounds alarming, a large-scale troop mobilization raises many questions, mostly because it is not clear how long it will take for reservists to be trained, equipped, and ready to fight.

During a press briefing this week, Pentagon spokesman Big. Gen. Pat Ryder told reporters “my understanding is these would primarily be reservists or members of the -- the Russian military that had retired and were in an individual ready-reserve type of status. All of that to say, it’s our assessment that it would take time for Russia to train and prepare and equip these forces.”

Another significant point is that throwing more soldiers into the fight does not mitigate the morale, sustainment, logistical, and tactical problems Russian forces continue to experience.

“I think it’s important also to point out here that while in many ways this may address a manpower issue for Russia, what’s not clear is whether or not it could significantly address the command and control, the logistics, the sustainment, and importantly, the morale issues that we’ve seen Russian forces in Ukraine experience,” Ryder said.

“Certainly if you are already having significant challenges and haven’t addressed some of those systemic, strategic issues that make any large military force capable, there is nothing to indicate that it’s going to get any easier by adding more variables to the equation,” he continued.

In some respects, adding more soldiers to the fight could even worsen supply and logistics problems and complicate integration into existing units. All of this involves a level of complexity and competence that the Russian military has not demonstrated during its invasion of Ukraine.  Ryder also added that given Russia’s performance so far, the mobilization announcement is not intimidating the Pentagon, NATO, or Ukrainian forces.

“Making threats about attacking territory, it doesn’t change the facts -- operational facts on the ground, which are that the Ukrainians will continue to fight for their country, the Russian military is dealing with some significant challenges on the ground, and the international community will stand behind Ukraine as they fight to defend their country from an invasion,” Ryder explained.