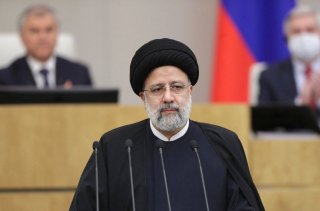 During the meeting, Raisi said that Iran sees Russia as a vital strategic partner and suggested that boosting political and economic collaboration between the two could “lead to the development of the two countries’ economies and increased security across the region.”

The Iranian leader highlighted opposing organized crime and terrorism as two areas of mutual interest between Tehran and Moscow. He also noted that the two nations have collaborated effectively in Syria, where both Iran and Russia intervened in support of President Bashar al-Assad against the Islamic State (ISIL) and other rebel groups.

Raisi implied that the two countries’ success in Syria offered valuable lessons for their interactions in other regional hotspots, including the Caucasus and Afghanistan. He voiced his opposition to NATO “infiltration” in Asia, which he suggested would “threaten the common interests of independent countries.”

Prior to his arrival in Moscow, Raisi indicated that the trip would be a “turning point” in relations between Russia and Iran that could lead to substantially expanded political, commercial, and security ties.

For his part, Putin praised the “close cooperation” between Iran and Russia in Syria. He also probed Raisi on Iran’s attitude toward the Joint Comprehensive Plan of Action (JCPOA), the 2015 nuclear deal that fell apart after former President Donald Trump’s withdrawal and reimposition of sanctions in 2018. Negotiations to renew the JCPOA are ongoing in Vienna, and Russia, a member of the “P5+1” nations that originally negotiated the deal, is taking part. Iran has been criticized for its insistence on preconditions, including its demand that certain U.S. sanctions be dropped immediately. As American negotiators see these demands as nonstarters, negotiations have stalled, and some observers have questioned the sincerity of Iran’s diplomatic efforts.

The two leaders also shared their concerns regarding Iran’s neighbor Afghanistan. Iran has an uneasy relationship with the Taliban; although it was extremely hostile to the group during its first period of rule in the 1990s, Iranian state-associated media outlets have praised the group since its conquest of the country in August 2021.

Raisi was elected in an August election that many observers believe was not fully free or fair. The country’s powerful Guardian Council, which is tasked with vetting candidates for office, was criticized at the time for disqualifying all prominent challengers to Raisi’s bid, including Vice President Eshaq Jahangiri and former President Mahmoud Ahmadinejad.

Raisi also addressed Russia’s State Duma, the lower house of its parliament, after his meeting with Putin.