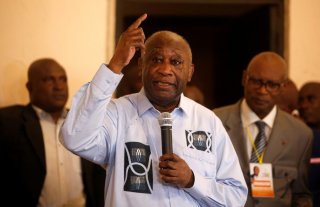 President Alassane Ouattara of Ivory Coast announced on Sunday that he had pardoned his predecessor in office, Laurent Gbagbo, in what he described as an attempt to decrease political tensions within the country.

Outtara announced the pardon during a televised address on Saturday, claiming that it had been issued “in the interests of strengthening social cohesion.” He also indicated that Gbagbo’s bank accounts would be unfrozen and his presidential pension would be restored.

One of the most controversial leaders in Ivory Coast's modern history, Gbagbo led the country from 2000 until 2010 when both he and Ouattara claimed victory in a presidential election, leading to a brief civil war. In early 2011, Gbagbo was arrested by pro-Ouattara troops, who extradited him to the International Criminal Court in The Hague to face charges of crimes against humanity. After an eight-year proceeding, Gbagbo was acquitted of all charges in 2019 but remained in exile after he was convicted in absentia of embezzling funds from the Ivorian central bank. However, Gbagbo ultimately opted to return to the country in 2021 at Ouattara’s invitation.

Ouattara indicated in his announcement that he had decided to issue the pardon after a “fraternal meeting” with Gbagbo and former president Henri Konan Bedie, who led the country from 1993 to 1999. Although he did not specify what the three leaders had discussed, the president indicated that they had gone over “matters of the national interest and the ways and means of consolidating peace in our country,” adding that a “friendly atmosphere” had prevailed throughout. Following the pardon, both Gbagbo and Bedie attended the celebration of Ivory Coast's independence day on Sunday alongside Ouattara.

During Ouattara’s administration, Ivory Coast has largely remained peaceful and stable, and it has not been significantly targeted by the ongoing Islamist insurgency in neighboring Mali and Burkina Faso. However, violence briefly erupted in late 2020 after Ouattara declared that he would run for a third term as president, a move that both Gbagbo and Bedie claimed violated the Ivorian constitution. The opposition ultimately boycotted the election, and Ouattara was officially re-elected with ninety-five percent of the vote.

Ouattara has not yet indicated whether he intends to run for a fourth term in 2025 but has suggested that he might step down if both Gbagbo and Bedie also agreed not to contest the election.