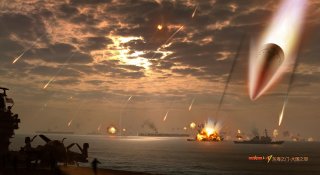 This month China released more details on its two "aircraft carrier killer" missiles that were tested in August, and traveled thousands of kilometers to their designated target near the Paracel Islands in the South China Sea. This is the first time Beijing has provided additional insight on the launch.

Wang Xiangsui, a former colonel and now professor at Beihang University in Beijing, told the South China Morning Post newspaper that the missiles successfully hit a moving ship, which was the intended target. The tests involved the DF-21D and DF-26B – weapons that are believed to be central to China's strategy of deterrence in the region.

China first unveiled the DF-26 – a road-mobile, two-stage solid-fueled intermediate-range ballistic (IRBM) – during a military parade in September 2015. It has a reported range of 4,000km (2,485 miles) and it can be used in both conventional and nuclear strikes against ground as well as naval targets. It can carry a 1,200 to 1,800 kg nuclear or conventional warhead, meaning that it could directly strike a target such as the U.S. territory of Guam in the event of war. The DF-26 has been described as a carrier killer because it could target the U.S. Navy's fleet of Nimitz- and Ford-class nuclear-powered supercarriers.

The DF-26 is among the type of weapons specifically banned by the Intermediate-range Nuclear Forces Treaty, which was signed by the United States and the Soviet Union near the end of the Cold War. However, China was never invited to join and the United States withdrew from the treaty last year citing Beijing's deployment of such weapons as a justification.

The DF-21D has also been described as the world's first anti-ship ballistic missile (ASBM) or "carrier killer." It has a range of around 1,800km, could be instrumental in striking a vessel in the open ocean or denying access to a potential opponent in transiting to a conflict zone, like in the East or South China Seas.

The danger too is that any missile that can hit a U.S. carrier could also be used against Japan's new naval platforms or one of Australia's new amphibious assault ships.

The tests of the two missile platforms came a day after Beijing accused the United States of sending a U-2 spy plane over a no-fly zone during Chinese People's Liberation Army Navy (PLAN) live-fire drills in the Bohai Sea. The United States Navy had also sent two of its aircraft carrier strike groups (CSG), led by the USS Nimitz and USS Ronald Reagan, to conduct tactical air defense exercises in the disputed waters "in support of a free and open Indo-Pacific."

According to the South China Morning Post, Beijing blasted the U.S. Navy's maneuvers this past summer, describing them as provocative, while Washington countered that China's missile launches were reckless and destabilizing.

The new carrier killers are just part of the People's Liberation Army (PLA) arsenal of missiles, which includes more than 1,250 ground-launched ballistic missiles and ground-launched cruise missiles with ranges of up to 5,500km (3,400 miles).