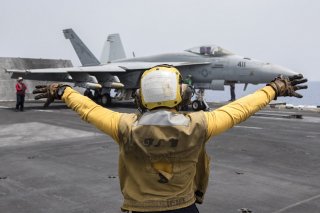 The concept of anti-aircraft missiles has been around since the First World War more than 100 years ago, but now China has reportedly tested missiles that could accurately be described as anti-aircraft carrier missiles. Multiple sources including Bloomberg News and the South China Morning Post reported that the missiles launched included the DF-21D and DF-26B – weapons that are believed to central to China's strategy of deterrence in the region.

Both of the missiles were launched into the South China Sea, and the move came one day after Beijing accused the United States of sending a U-2 spy plane into a "no-fly zone" during a People's Liberation Army Navy (PLAN) live-fire naval drill in the Bohai Sea off China's north coast.

One of the missiles – the DF-26B – was launched from the northwestern province of Qinghai; while the other – the DB-21B – was launched from the eastern province of Zhejiang. Both of the missiles were fired into an area between the Hainan province and the Paracel Island, a source with the People's Liberation Army (PLA) told the South China Morning Post. The landing areas were within a zone that maritime safety authorities in Hainan had said would be off-limits because of military exercises that were being held from this past Monday to this coming Sunday.

What is notable about the launches is that the DF-26B dual-capable missile is of a type of weapon banned by the Intermediate-range Nuclear Forces Treaty that was signed by the United States and the Soviet Union near the end of the Cold War, a treaty that China was never invited to join. The United States withdrew from the treaty last year and cited China's deployment of such weapons as a justification.

China first unveiled the road-mobile, two-stage solid-fueled intermediate-range ballistic (IRBM) DF-26 during a military parade in September 2015. It has a reported range of 4,000km (2,485 miles) and it can be used in both conventional and nuclear strikes against ground as well as naval targets. It can carry a 1,200 to 1,800 kg nuclear or conventional warhead, meaning that it could directly strike a target such as the U.S. territory of Guam in the event of war. It has been described as a carrier killer because it could target the U.S. Navy's fleet of Nimitz- and Ford-class nuclear-powered supercarriers.

The other missile, the DF-21D has a range of around 1,800km, and it has been described as the world's first anti-ship ballistic missile (ASBM) or "carrier killer," and for that reason, it would be instrumental in striking a vessel in the open ocean or denying access to a potential opponent in transiting to a conflict zone, like in the East or South China Seas.

The demonstration of the missiles was likely Beijing's way of sending a clear message to Washington.

"This is China's response to the potential risks brought by the increasingly frequent incoming US warplanes and military vessels in the South China Sea," the PLA source told the South China Morning Post. "China doesn't want the neighbouring countries to misunderstand Beijing's goals."

Bloomberg quoted a U.S. defense official who asked not to be identified as saying that China actually fired a total of four medium-range ballistic missiles during the series of military exercises – and this was not far from U.S. carriers had conducted drills in recent weeks. To that end the tests were likely intended for "U.S. consumption" and not for a domestic Chinese audience.

The message may have been heard, but it is doubtful either side will completely back down.