In a Reversal, Germany Sends Heavy Weapons to Ukraine 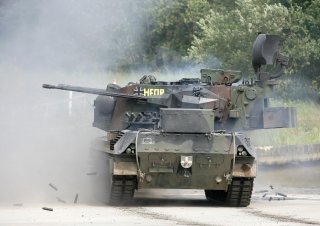 Germany has greenlit the transfer of heavy weapons to Ukraine, signaling a significant policy shift as the war in Ukraine enters its third month.

"We decided yesterday that we will support Ukraine with anti-aircraft systems ... which is exactly what Ukraine needs now to secure the airspace from the ground," said German defense minister Christine Lambrecht during a meeting of international defense officials at Ramstein Air Base on Tuesday. Germany’s Gepard anti-aircraft systems entered service in the 1970s, comprising a key part of Germany’s air defense capabilities before being phased out in 2010 in favor of the Wiesel 2 Ozelot.

Germany was initially hesitant to provide weapons to Ukraine, limiting its assistance to humanitarian aid. That approach was consistent with Germany’s decades-long policy of not sending weapons into conflict zones. However, Berlin quickly caved to mounting criticism from EU and NATO partners, reversing its stance with a decision to send 1,000 anti-tank weapons and 500 Stinger anti-aircraft missile systems to Ukraine. Germany also gave Estonia permission to supply Kyiv with 122-millimeter howitzers. The howitzers, which were previously owned by Finland and Germany, required permission from both countries before they could be shipped to Ukraine under international law.

A government spokesman said on Monday that Germany will soon reach a final decision on whether or not to send 100 Marder infantry fighting vehicles to Ukraine. Germany previously said it did not have any Marders to send to Ukraine because Berlin needs them for national defense purposes and to remain in compliance with NATO force commitments. "Here, we now have to recognize that the options we have are reaching their limits," Chancellor Olaf Scholz said last week. German foreign minister Annalena Baerbock said in Latvia earlier this month that Germany had no additional weapons that could be delivered “quickly and without delay right now.” Berlin has further argued that Ukraine’s armed forces are not trained in operating and maintaining the Marder, limiting its immediate battlefield utility.

Germany’s position drew a sharp rebuke from Andriy Melnyk, Ukraine’s ambassador to Germany. "The claim that the Bundeswehr would not be able to deliver anything to Ukraine is not comprehensible," Melnyk said. Melnyk argued that the Marders in question were used for training purposes and could thus be handed over to Ukraine immediately.

Scholz indicated in an interview with Der Spiegel last week that his preferred solution is to backfill the needs of Eastern European NATO members who are supplying Ukraine with heavy weapons rather than sending such equipment directly to Kyiv. Berlin is finalizing a deal to transfer Marder and Fuchs armored vehicles to Slovenia in return for Slovenia delivering M-84 main battle tanks to Ukraine, according to unconfirmed reports by German media sources.