Off on the Right Foot? U.S. Officials Meet the Philippines’ Next Leader 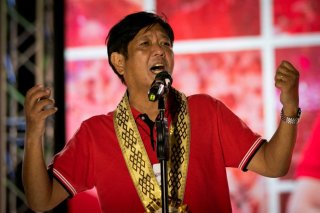 Following the meeting in Manila, the capital of the Philippines, Sherman tweeted a summary of her discussion with Marcos Jr., which she said included issues such as bilateral economic ties, commitment to human rights, and the desire to “preserv[e] a free and open Indo-Pacific.” Marcos’s spokesman, Victor Rodriguez, described the meeting as a discussion on “the importance of deepening the alliance and friendship between the Philippines and the United States, as well as partnering together in order to strengthen the economy between the two countries.”

Sherman’s trip to the Philippines comes as the United States has sought to reconstitute its alliances in the Indo-Pacific following growing pressure from China, which has worked to sway many Asian nations to its side. After her meetings in the Philippines, the deputy secretary is scheduled to travel to South Korea, Laos, and Vietnam, while Secretary of Defense Lloyd Austin is scheduled to speak at the Shangri-La Summit in Singapore later in the week.

While the Philippines and Vietnam have traditionally been U.S. allies—particularly since China began to assert its claim to the nine-dashed line area of the South China Sea, infringing on existing Vietnamese and Filipino claims—tensions grew between the United States and the Philippines under Duterte following American criticism of the Philippines’ anti-drug campaign, during which the president openly supported the extrajudicial executions of drug dealers. As many as 6,000 Filipino citizens have been killed in these operations and human rights groups have voiced concerns that many of them were probably innocent and would have been saved if their cases had gone to trial.

The elder Marcos ruled the Philippines from 1965 until his overthrow in 1986. In 1972, he placed the country under martial law, allowing him to rule as a de facto dictator for the next fourteen years. However, an economic crisis during the 1980s, combined with the perception of Marcos and his wife Imelda Marcos as kleptocrats who purchased luxury goods with public funds, contributed to his overthrow in the People Power Revolution in 1986.

However, the younger Marcos was elected in a landslide in May with Duterte’s endorsement and ran alongside Duterte’s daughter, Sara Duterte, as his vice president, although the Filipino political system elects the two positions separately. Prior to his election, the president-elect had been sanctioned in the United States for failing to return his father’s stolen cash and property to the Filipino government. Marcos has denied owning stolen property, and the legal proceedings against him were waived after his election, according to the State Department.

In spite of pre-existing tensions, the United States has pledged to work with Marcos and President Joe Biden was one of the first world leaders to call him and congratulate him on his election victory.