Ruger Security-9: The Best Carry Pistol for Under $300 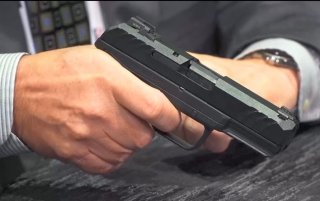 I want to say off the bat, that if you’re looking for an entry-level pistol for self-defense or concealed carry, the Ruger Security-9 is a fantastic option. It has everything you could really want in a carry pistol. You have great capacity, a smaller, more comfortable size, and best of all: it’s affordable.

Ruger is basically a staple for anyone that owns a gun. I will admit that I’m guilty of overlooking them, but plenty of their firearms are high quality and have won me over.

For this review, I purchased the compact version of the Security-9. Naturally, it’s smaller than some of its counterparts since it’s compact. I think it looks extremely clean overall and it fits well in my hands. Like many modern pistols, the Security-9 features a polymer frame that has seemed pretty sturdy thus far. There are some superficial scratches from everyday use and holstering/unholstering. All of the features like the mag release and slide stop are basically flush with the frame and cut down on the overall profile. The only thing I have to complain about is that I’m not a fan of the painted “U” style irons. It’s not a big deal at all, I just prefer flat black sights if I’m relying on irons as my primary method of aiming.

Functionally, the Security-9 was pretty flawless. It was a great shooter and definitely didn’t feel like a “budget” gun. Not to mention that it ran all of my ammo without a single hitch, even some less than quality steel-cased rounds.

Recoil isn’t anything to write home about. It’s basically exactly what you’d expect from any other 9mm which is to say not much. The kick is easy to control and stays pretty flat even when moving through a mag quickly.

Accuracy is also super solid. If you’re using this for self-defense or concealed carry, you won’t be having any issues whatsoever under twenty-five yards. (That's if you train!) From standing my groups were about two inches apart at twenty-five yards and I was still pinging steel at fifty yards without too much effort.

Concealability and affordability are the two main things I was focused on when I purchased this pistol. The bottom line is that the S9 is a great carry pistol. It’s slim and light (on par with a compact Glock) which makes basically any pistol a contender for carrying. To add to that, the magazine capacity is the industry standard of fifteen rounds in the magazine plus one in the chamber. Not a bad option for carrying at all.

To make a long story short, this is a great pistol you should buy if you’re just getting into carrying. It functions perfectly, it’s reliable and accurate. And you can buy it for less than $300. That’s a bargain if I’ve ever seen one. If you already have a quality carry pistol, this won’t make you switch, but it’d be an excellent addition to your safe anyway.