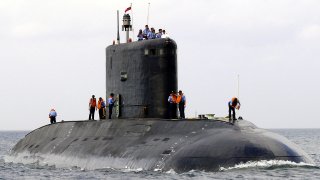 “The submarine Volkhov, the second in a series of six ships under construction at the Admiralty Shipyard for Russia’s Pacific Fleet, will be accepted for service with the Russian Navy on October 24 in compliance with an order by Navy Commander-in-Chief Admiral Nikolai Yevmenov,” Russian Navy spokesman Captain 1st Rank Igor Dygalo told Tass.

The ceremonial raising of the St. Andrew’s flag, Russia’s naval ensign, aboard the submarine will take place at the Admiralty Shipyard.

The submarine, which was laid down in 2017 and floated out in December 2019, completed its sea trials over the summer. From the end of June to the end of July the shipbuilders checked the sub’s sonar, radar, communications and life-support systems as well as other equipment. The Volkhov also successfully accomplished its planned submergences, while all the systems and mechanisms were reported to have operated in the normal mode and in complete compliance with the stated operational characteristics.

The Project 636.3 Varshavyanka-class submarines (NATO reporting name: Improved Kilo-II) has been referred to as the third generation of large diesel-electric underwater cruisers in service with the Russian Navy. The improved Kilo-class subs, which have been nicknamed “Black Holes” by the U.S. Navy, are meant for operations in shallower, coastal waters and are tasked with anti-ship and anti-submarine warfare. They carry a crew of fifty-two submariners.

The Volkhov is the second of the six diesel-electric submarines built by the Admiralty Shipyard for the Pacific fleet. The first boat of this Project, the Petropavlovsk-Kamchatsky, was delivered to the Navy last December, while the Admiralty Shipyard is currently constructing two more submarines of this type for the Pacific Fleet: the Magadan and the Ufa.

Russia has been steadily increasing its submarine fleet in recent years, and three of the Varshavyanka-class submarines were also delivered by Admiralty Shipyards to Russia’s Black Sea Fleet in 2014.