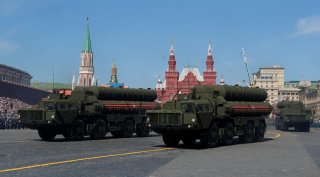 In what may be one of the consequential defense developments of 2021, Russia’s next-generation S-500 missile defense system is on the cusp of entering service.

Russian Deputy Defense Minister Alexei Krivoruchko told the defense publication Krasnaya Zvezda that the Russian military plans to complete state trials of the next generation S-500 surface-to-air/anti-missile system sometime in 2021, with its introduction into service to follow in the same year. "Next year, it is planned to complete trials and introduce into service the S-500 missile system and the Voronezh radar that works in the meter range of wavelengths," he said in a late December 2020 interview.

The S-500, also known as the Triumfator-M, has had a rocky research and development path. Its development was declared to be completed as early as 2011, with serial production expected to begin in 2014. That date was unceremoniously pushed back to 2017, and again to 2020. Krivoruchko’s revised 2021 estimate is one to which he has stuck throughout 2020, with the Russian defense official likewise adding that serial S-500 deliveries are expected to begin in 2025. Turkey’s President Recep Tayyip Erdoğan has previously expressed his interest in jointly producing the S-500 with Russia, though the state of those talks between Moscow and Ankara in 2021 is ambiguous. The first S-500 regiments are exceedingly likely to protect Moscow and the areas surrounding it— beyond that, Russia’s deployment plans for its new system remain unclear.

The much-anticipated “successor” to the S-400 boasts a slew of best-in-class performance features. Triumfator-M is widely believed to be capable of engaging ballistic missiles at a range of up to 600 kilometers and enemy aircraft at roughly 500 km, an exponential improvement over the S-400. Outfitted with new homing warheads, Russia’s upcoming air defense system can track and target up to ten missile warheads flying at a speed of over 4 miles per second. The S-500’s 77N6 series of missiles is reportedly capable of intercepting hypersonic cruise missiles and ICBM’s, as well as other aerial objects flying at speeds of over five Mach. The manufacturer, Almaz-Antey, maintains that the S-500 can even threaten certain types of low-orbit satellites, though the full extent of the S-500’s capabilities at extremely high altitudes remains to be determined.

It is unknown how many S-500s are scheduled for delivery, and how quickly. Nevertheless, it would be a financial and technical nonstarter for the Kremlin to attempt to replace every S-400 regiment with the costly and sophisticated S-500. Instead, it appears that the Triumfator-M is intended to serve alongside the S-400 into the coming decades as a longer-range and more situationally capable complement. With its advanced tracking and targeting capabilities, it can bolster existing S-300 and S-400 systems with an additional layer of defense against saturation strikes. Nevertheless, it promises a fundamentally new level of performance against niche, but existential threats like hypersonic weapons.

In that sense, the S-500 is less of a pure “successor” to the S-400 than it is an entirely new weapon, designed to fulfill a different—though not necessarily more important— set of strategic tasks.