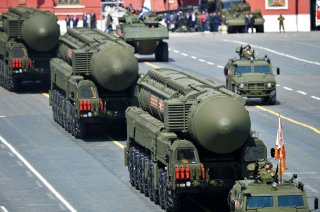 Signaling is a critical factor of geopolitics, as a state needs to credibly communicate its intentions to compel an adversary or ally to bend to its will. Yet, almost at a daily pace, Russia’s leaders threaten the international community, with the latest threat being Putin’s warning of a “lightning-fast” response to any nation that intervenes in Ukraine. Russia’s demands highlight both its internal insecurity about the course of the war and its inability to follow through on threats, ultimately harming its international position.

Russia has often doubled down on failure, moving from one to another, increasing its effort with each wave with the hope of ultimately prevailing through sure persistence rather than any strategic or technological advantage. This can be seen in the course of Russia’s interventions in Afghanistan, Syria, and now Ukraine, with this approach reaching a natural conclusion against the wall of Ukrainian forces armed with Western weapons.

At first, Russia responded to the West’s rejection of its war aims by demanding that all of its energy exports be purchased with rubles, a policy that quickly backfired after Western nations balked and hastened their exits from Russian energy markets. Another recent threat was the Russian Defense Ministry’s claim that British support for Kyiv will "immediately lead to a proportional response." To seemingly back up its threats and demonstrate its nuclear capabilities, Russia has continued to test ballistic missiles as the war rages on.

Cataloging Russia’s empty threats will be a task for scholars long into the future. On April 14, Russian military leaders threatened to strike "decision-making centers" after Ukraine conducted various raids on key Russian supply points. Russia noted that Ukrainian aggression would not go without retaliation, expressing shock that Ukraine would dare attack Russian territory while waging a brutal war against Ukraine. And back on March 9, Kremlin spokesman Dmitry Peskov responded to a question by saying, "If you are asking me what Russia is going to do—Russia is going to do what is necessary to defend its interests. The United States definitely has declared economic war against Russia and is waging this war."

In mid-April, fearing retribution, the U.S. government warned Americans of impending cyberattacks and called on companies to “harden [their] cyber defenses immediately.” While it was prudent to prepare the defenses, the cybersecurity community declared that cyberwar was finally imminent. However, these declarations amounted to fantasies of large-scale cyber combat, and many forgot that Russia had a failing war to manage. Instead, nothing happened. A Russian cyber strike in retaliation would not be out of the norm; Russia launched at least forty-seven cyber operations against the United States between 2000 and 2020. The United States has been due for an attack based on basic probabilities. But paradoxically, retaliation is rare in cyberspace. While the United States worries about poking the Russian bear, Russia is also concerned about awakening U.S. cyber and conventional capabilities, which could lead to a form of mutually assured destruction in cyberspace.

What do we make of Russia shaking its metaphorical fists constantly? Since the invasion began, Russia has threatened anyone who dared to question its invasion, atrocities, or even its military’s failures on the battlefield. Almost three months into the war, Russia has retreated from the Kyiv front with less territory than it had during its initial push. Russia has failed to leverage its doctrine of hybrid warfare, leaving cyber, artificial intelligence, and even electronic warfare on the sidelines as its troops struggle on the battlefield. Things are worse on the diplomatic front, with the United Nations condemning Russia’s actions, the International Criminal Court conducting ongoing investigations, and Sweden and Finland in the process of applying to NATO. Russia again backed down from earlier threats, now suggesting that building NATO infrastructure in the Nordic states is the new red line. While Ukraine may never join NATO, it may very likely join the European Union, entrenching itself firmly in Europe’s defense infrastructure.

Restraint against a nuclear-armed belligerent is always warranted, but undue respect for a power that so often fails to live up to its threats is not. However, Russia still resorts to appealing to fears of World War III to cajole international actors into following its desired path. For instance, Russian foreign minister Sergei Lavrov has remarked, “Under no circumstances should a third world war be allowed to happen. There can be no winners in a nuclear war.”

As time goes on and the scale of the Russian military disaster in Ukraine becomes clear, Russia has in many ways been exposed as a paper tiger, unable to match its belligerence with effective action. Russia has lost a massive amount of equipment and soldiers, both of which are in short supply due to sanctions and the refusal to mobilize for full war, leading some analysts to suggest that Russia can only sustain the fight for three more months, weakening its ability to continue a war of its choosing, let alone a war it wants to avoid with NATO.

Still, reckless behavior, backed by empty threats, endangers the international system as Moscow doubles down in response to each foreign policy failure. These threats without credibility signal no clear intentions, leaving the international community confused by Russia’s actions, increasing support for Ukraine, and making the expansion of NATO a fait accompli. The danger is that Russia’s constant threats will degrade its ability to make coercive demands in the future as it is pressed more and more into isolation. To have a wounded great power full of bluster and unable to demonstrate credibility in its actions puts us all in a dangerous place. Caution is critical when doomsday is on the line, and the United States would be wise to continue its evident restraint and not confuse a weakened Russia with the elimination of a threat.