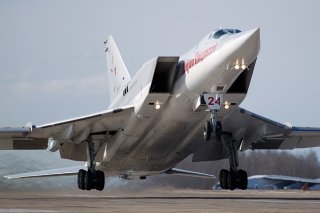 On Wednesday a pair of Russian Tu-22M3 strategic bombers took part in a five-hour flight over the neutral waters of the Black Sea, Russian state media announced. The flights, which were over forty-five hundred kilometers, were likely meant to be a display of the capabilities of the long-range bombers.

“Two Russian Tu-22M3 long-range aviation strategic bombers conducted a scheduled flight in the air space over the neutral waters of the Black Sea,” the Russian Defense Ministry told Tass, adding that “at certain parts of their flight route, the planes were escorted by Russian Su-27 fighters, as well as foreign jets.”

Tass reported that the aircraft regularly conducts flights over the neutral waters of the Arctic, the Northern Atlantic, the Black and Baltic Seas and the Pacific Ocean. The Ministry has said all of the flights of the Russian Aerospace Forces’ planes take place in strict compliance with the international air law.

The Russian Tu-22M3 was reclassified from tactical bomber to heavy, nuclear-capable strategic bomber. The Tu-22 was originally introduced in 1983, and the M3 models remained in service after the collapse of the Soviet Union. Despite the fact that the aircraft were introduced in the late Cold War, the Tu-22M3 has remained the face of the Russian Aerospace Forces and as noted by the Defense Ministry the aircraft has flown patrol missions across Europe and Asia.

Many of the airframes have been upgraded as the Tu-22M3M, which features new avionics systems that consist of GLONASS navigation system integration, a digital onboard interface and electronic warfare countermeasures (ECM). These upgrades should increase navigation precision, provide simplified maintenance and preflight preparation.

A prototype of the Tu-22M3M supersonic bomber underwent trials at hypersonic speeds during a fourth test flight in May. The Tu-22M3M will also reportedly be able to carry Russia's new hypersonic missile. The bombers have been seen as a valuable addition to the air component of Russia’s nuclear tried but also as the spearhead of a new power projection strategy to counter American carrier strike groups (CSG) that operate near Russia's sphere of influence.

While the Russian Defense Ministry boasted about the recent five-hour flight of the two Tu-22M3 bombers over the Black Sea, perhaps it should be put into context.

Earlier this month six Cold War-era B-52 Stratofortress strategic bombers—aircraft that are far older than the Tu-22M3—took part in an operation dubbed “Allied Sky” and flew across thirty NATO countries in a single-day mission that was meant to highlight solidarity with U.S. partners and allies. Four of the Cold War-era U.S. Air Force bombers were deployed from Royal Air Force (RAF) Fairford in the UK and flew over Europe, while two bombers from the 5th Bomb Wing at Minot Air Force Base, North Dakota flew over the U.S. and Canada.