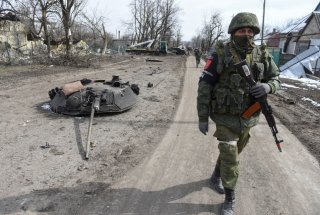 The Russian Defense Ministry claimed on Monday that Ukraine had launched a missile attack against Donetsk, the capital of the self-proclaimed “Donetsk People’s Republic” (DNR) in eastern Ukraine, resulting in twenty-three civilian deaths and twenty-eight injuries.

According to the report, the missile used was a Soviet-era “Tochka-U,” a type of ballistic missile that the Ukrainian military received after the breakup of the Soviet Union and continues to operate. Footage on social media from the previous day showed pieces of a similar ballistic missile, a design Ukraine inherited from the Soviet Union, in the street in Donetsk. Russia’s state-run TASS news agency claimed that that missile had been shot down by Donetsk’s air defenses.

Denis Pushilin, the leader of the DNR, claimed that the missile had struck a residential area and that several children had been killed in the attack. The Russian Defense Ministry argued that the missile attack appeared to specifically target civilians, a war crime according to the Geneva Convention.

The Ukrainian military denied launching the missile and blamed the Russian military, which also operates the Tochka-U missile. The incident, including the death toll, could not be verified by outside sources, leading to suspicions that part or all of it had been overstated or fictionalized for propaganda purposes.

The missile attack occurred on the same day as Russian and Ukrainian diplomats met in Belarus to discuss a negotiated end to the conflict, which began on February 24 after Russia invaded Ukraine from the north, east, and south. The talks ended without an agreement and will likely resume in the near future.

Russian leader Vladimir Putin has claimed that the “special military operation” against Ukraine was launched to “demilitarize and de-Nazify” the government in Kyiv, which he argued had fallen under “nationalist” rule after the Maidan Revolution in 2014. These justifications have largely been ridiculed in the West, as Ukraine’s current president, Volodymyr Zelensky, was elected to his position in 2019 in a contest that international observers described as free and fair. Responding to accusations that the Ukrainian government is dominated by neo-Nazis, Zelensky has noted that he is Jewish.

Although Russia made progress into Ukraine in the first days of the conflict, its advance has largely stopped, owing to logistical problems, committed Ukrainian resistance, and a failure to secure air superiority over Ukraine, allowing Ukrainian planes and drones to continue to strike at Russian ground targets.