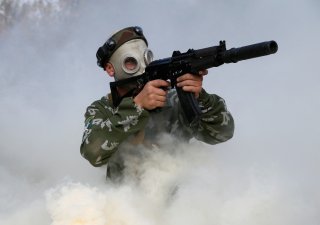 "On the night of March 9, Ukrainian nationalists delivered about 80 tonnes of ammonia to the populated locality of Zolochev, northwest of Kharkov. According to those locals who fled Zolochev, nationalists had been training them how to act in a chemical weapons attack. All this proves that Ukrainian nationalists are preparing a provocation involving poisonous substances to blame Russia for the alleged use of chemical weapons," Russian defense ministry spokesman Igor Konashenkov said on Wednesday, according to Russian state news enterprise TASS.

Konashenkov did not provide any evidence of the alleged Ukrainian plot.

The Kremlin’s assertion comes on the heels of fresh Russian allegations that the U.S.-linked biolabs in Kiev and Odessa could be engaged in chemical weapons research.

Undersecretary of State for Political Affairs Victoria Nuland told the Senate Foreign Relations Committee on Tuesday that there are “biological research facilities” in Ukraine. Nuland said, without elaborating on the nature of the threat, that the United States is “quite concerned Russian troops, Russian forces, may be seeking to gain control of” these facilities. She also said Washington is working “with the Ukrainians on how they can prevent any of those research materials from falling into the hands of Russian forces should they approach.”

Department of Defense spokesman John Kirby dismissed the allegations in a press conference on Wednesday.

“The Russian accusations are absurd, they are laughable and you know, in the words of my Irish Catholic grandfather, a bunch of malarkey,” he said. “There's nothing to it. It's classic Russian propaganda.”

An unnamed senior defense official giving a briefing on Ukraine on Wednesday also said the Russian claims are false.

“This is a piece of the Russian playbook here,” the defense official said. “Claim they’re the victims, create a false narrative to try to justify their own aggressive actions. "

Chinese government officials have boosted Moscow’s biolab accusations. Chinese foreign ministry spokesman Zhao Lijian said on Wednesday that “a large quantity of dangerous viruses are stored in these facilities.” Zhao called on Washington to “disclose specific information as soon as possible, including which viruses are stored and what research has been conducted.”

“Now that Russia has made these false claims, and China has seemingly endorsed this propaganda, we should all be on the lookout for Russia to possibly use chemical or biological weapons in Ukraine, or to create a false flag operation using them,” Psaki said. “It’s a clear pattern.”