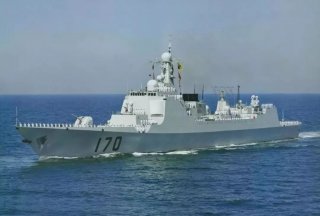 Russia and China have kicked off joint naval drills in the Sea of Japan. The exercises, dubbed Joint Sea 2021, will run from October 14 to 17.

According to the press office of the Eastern Military District, the Russian Navy is represented by the following units from the country’s Pacific Fleet: the Udaloy-class destroyer Admiral Panteleyev, Steregushchiy-class corvettes Hero of the Russian Federation Aldar Tsydenzhapov and Gromky, the Kilo-class diesel-electric attack submarine Ust’-Bolsheretsk, two unidentified coastal minesweepers, a missile boat, and rescue tug. The Chinese People’s Liberation Army (PLA) forces will include the Type 051D guided-missile destroyer Nanchang, Type 052D guided-missile destroyer Kunming, Type 054A frigates Binzhou and Liuzhou (it appears the two frigates were wrongly identified in the Eastern Military District statement as corvettes), and an unidentified “diesel submarine,” supply ship, and rescue vessel. According to the provided statement, the Chinese vessels arrived in Peter the Great Bay on October 13. The vessels were joined by a naval aviation contingent, consisting of twelve unidentified Russian and Chinese helicopters and fixed-wing aircraft.

Chinese state media sources said the drills will involve joint anti-air and anti-submarine operations, as well as maritime maneuvers and strikes against sea-based targets. Russia’s Defense Ministry added that the drills will involve coordinated artillery fire and movements aimed at cordoning off notional enemy submarines. Joint Sea 2021 will mark the first time that the Chinese military has sent anti-submarine warfare aircraft and heavy destroyers for exercises abroad. The press statement accompanying the exercises noted that the first joint Russian-Chinese naval drills took place in the Yellow Sea in 2005, as part of the Peace Mission 2005 drills. There was speculation among western observers that Peace Mission 2005 was principally aimed at intimidating Taiwan, but Russian commentators saw the drills more as a signal to the West that Moscow and Beijing are making strides in the field of defense cooperation. The Russian Defense Ministry noted, without elaborating, that Joint Sea 2020 was canceled due to pandemic-related restrictions.

Joint Sea 2021 comes on the heels of Australia’s recent deal with the United States to obtain a fleet of eight nuclear-powered submarines and the passage of the AUKUS trilateral security pact between Washington, London, and Canberra. Beijing has vigorously condemned AUKUS—which is widely seen as a measure to contain Chinese military power in the Pacific—as “a product of a cold war mentality and narrow geopolitical concepts.” Li Song, China’s ambassador for disarmament affairs, added that “their cooperation on nuclear submarines is a textbook case of nuclear proliferation, which tramples on the spirit of the Treaty on the Non-Proliferation of Nuclear Weapons.”

Chinese officials have seized on recent news that the Seawolf-class fast-attack submarine USS Connecticut (SSN 22) collided with an unknown object while conducting a routine mission in the South China Sea, demanding a “satisfactory explanation” and accusing Washington of engaging in a cover-up. The cause and full circumstances of the Connecticut collision have not been made public, with the Navy announcing earlier in October that it is still assessing the incident.