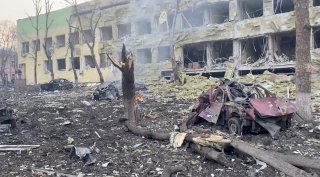 A Russian air strike on Wednesday afternoon damaged a children’s hospital and maternity ward in Mariupol, a besieged port city in eastern Ukraine, according to local authorities.

Ukrainian officials claimed that the attack injured seventeen people, all of which were adult workers at the hospital. Pavlo Kyrylenko, the governor of Ukraine’s eastern Donetsk province, said that no children had been injured in the airstrike, and it appeared that no one was killed. Ukrainian and Western officials condemned Russia for bombing a children’s hospital as a war crime in clear violation of the Geneva Convention, which bans military action against hospitals and other civilian targets.

Ukrainian president Volodymyr Zelensky described the bombing of the hospital as a “direct strike,” seemingly ruling out the possibility that the strike had missed a different target.

“People, children are under the wreckage,” Zelensky wrote on Twitter. “Atrocity! How much longer will the world be an accomplice ignoring terror? Close the sky right now! Stop the killings! You have power but you seem to be losing humanity.”

Zelensky has called for a NATO-enforced no-fly zone over Ukraine in recent days. A no-fly zone could be used to deny Russian aircraft the ability to conduct further strikes against Ukrainian targets.

Many U.S. and European citizens support the imposition of a no-fly zone, but NATO officials and other security experts have warned that it would be impossible to implement without requiring NATO forces to engage in direct military action against Russian aircraft. That would represent a major escalation between Russia and the West, with fears that further escalation could lead to a nuclear conflict.

The event has also underscored the importance of reinforcing Ukraine’s depleted air force by providing it with Russian-made MiG-29 fighters in NATO countries’ arsenals. The United States and some NATO allies have considered the idea, although the Russian government said it would view an attempt to fly the aircraft into Ukraine as an act of war.

On Tuesday, the Polish government announced that it would be willing to transfer its MiG-29 fighters to the United States, effectively passing Washington the responsibility for transporting them to Ukraine. The Pentagon later declined the proposal, and efforts to resolve the impasse are ongoing.