Is Russia Building a Global Network of Drones? 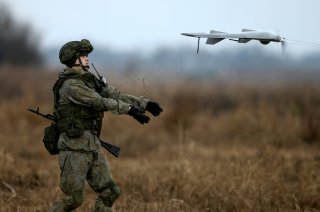 Unmanned and unpiloted vehicles are both a dream for military planners and a nightmare for opponents of weaponized robotic systems. For the military such technology doesn’t put a human pilot, soldier or sailor in harm’s way—but it also takes the human factor out of the equation, meaning that the machine could potentially take a human life based on its own determination.

This has worried academics as well as those in the tech world.

Yet, it hasn’t stopped militaries around the world from employing new advances in artificial intelligence (AI) and machine learning to create autonomous weapons. Now the Russian Central Design Bureau for Marine Engineering Rubin is reportedly looking to take this up a notch and is working on the creation of a global network of underwater, surface and air drones.

The Design Bureau’s CEO Igor Vilnit told Russian state media, “In the long term the bureau’s specialists have plans for creating a global network consisting of a large number of deep-diving vessels, autonomous underwater vehicles, gliders, lighting devices, UAVs, and means of communication and other components for conducting large scale research and exploration.”

The project’s goal would be to create greater integration of the various classes of robots that are being used in everything from submarines to surface ships to supply vessels.

“In creating maritime robotized systems various means and modes of their interaction with different types of carriers—both subsurface and surface ones—are being developed,” Vilnit added. “The use of network principles of creating complex robotized systems and advanced cutting-edge technical solutions and new methods of programming algorithms will allow for creating systems crucial to the navigation, communication with and command of diversified robotized systems operating under the surface of the world ocean and in the air.”

This approach to a networked system of robotic drones could make it possible to set up unified command centers to control the various platforms in real-time. However, the question must be asked whether it would also enable such a system to be easily hacked or create a situation that sounds like something out of science fiction—where the network turns on its human masters.

While the drone systems that the Central Design Bureau for Marine Engineering Rubin have proposed don’t actually sound weaponized, there is still some fear in how such a global network would be integrated with other platforms in development.

The Russian Navy is currently developing a submarine that could serve as a basic carrier for its “Poseidon” nuclear-capable unmanned underwater vehicles (UUVs). The Khabarovsk [Project 09852] will be floated out later this month and could carry up to six Poseidon UUVs, which can operate as an autonomous nuclear torpedo with a nearly unlimited range.

While the United States has employed drone aircraft since the 1950s, these have largely been controlled by a human operator or unmanned aerial vehicle (UAV) pilot, but the U.S. Air Force is now also working on its own autonomous killer drone, which would include a version of “Skyborg” AI, which could enable the UAV to do the flying and fighting. The U.S. Navy is also reportedly developing a so-called “Ghost Fleet” of robotic vessels that could be employed to surveil, counter, overwhelm and attack enemies in a coordinated fashion—all while keeping sailors on host ships at safer distances.

The great danger remains that other powers are making strides with robotic and autonomous weapons. Turkey has developed a drone platform that it has used to take out targets in Syria, while China has also been developing robotic weapons platforms including so-called Kamikaze Drones and even a weaponized unmanned ground vehicle.

Perhaps in addition to worrying about great power competition, the U.S. military should also be thinking about how to stop these increasingly autonomous weapons should they start to have their own ideas!