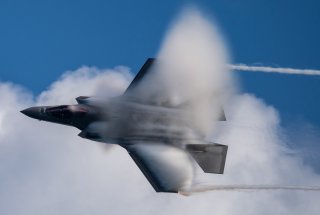 "The Nebo-M radar is the menace of stealth technologies. It can see F-22, F-35 and so on perfectly well," said Almaz-Antey chief Yan Novikov at the “New Knowledge” technical forum in Moscow. Novikov added that Almaz-Antey “produces more than 30 types of mobile multi-funcional radar systems.”

The 55ZH6M Nebo-M is among Russia’s newest surveillance radars; as with most of its kind, it is designed by the Nizhny Novgorod Research Institute of Radio Engineering (NNIIRT)—an Almaz-Antey subsidiary. Nebo-M is part of the Nebo—Russian for “Sky”—family of VHF (very high frequency) radar systems. The first Nebo-M units entered service in parts of Russia’s Western Military District in 2017 and were delivered to Crimea in the following year.

The Nebo-M can detect aircraft and ballistic missiles at ranges of up to one thousand kilometers, a substantial improvement over the original Soviet-era Nebo radars. The Nebo-M is an active electronically scanned array radar, making it somewhat resistant to certain kinds of jamming techniques. Specializing in medium-high altitude detection, Nebo-M installations are sometimes accompanied by Russian low-altitude radar systems like the Podlet-E.

Russian state news outlet TASS adds that “stealth technologies pose no problem for the new radars,” but the full picture is more complex. It is true, in theory, that advanced VHF radars like Nebo-M can feasibly detect an approaching F-35 stealth fighter jet or the F-22 fighter jet, but detection is only one part of a multi-step targeting process. After being detected, the F-35s in question must still be fixed, tracked, targeted, and successfully neutralized. “Adversaries have to build a kill chain,” former F-35 pilot and retired Marine Maj. Dan Flatley explained to  Business Insider. It falls on the other fixtures of Russia’s anti-air arsenal, like its flagship S-400 missile defense system, to execute the remaining parts of the kill chain against enemy fighters. “We’re not trying to prevent every aspect of that chain, just snap one of those links,” Flatley added. “I don’t need to stop everything all the time. I just need to make you unable to finish what you’ve already invested tons of time and money and effort in trying to shoot me down.”

There is another aspect to consider: the pilots of the F-35 jets in question aren’t simply going to let themselves be passive targets, and they likely won’t come alone. Nebo-M is a high-value asset, and thus an apt candidate for an early precision strike aimed at hamstringing Russian anti-air capabilities. But the Russians know this and will take steps to protect these radars by fielding them as part of a larger, echeloned network of overlapping missile/air defense systems.

It is technically true that the Nebo-M and similar radars can spot America’s fifth-generation fighter jets, but that is only one piece of a larger battlefield puzzle. Detection is one thing, but whether or not a Russian air defense network can successfully neutralize an F-35 stealth jet or F-22 fighter jet squadron depends on a wide range of contingent factors that are difficult to model in the abstract—from the specific setting to the force composition between the two sides.