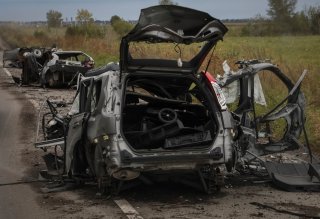 Officials in Belgorod have ordered the evacuation of several Russian border villages on the heels of sweeping Ukrainian gains in the neighboring Kharkiv region.

Russian news outlet RIA Novosti reported on Monday that Belgorod authorities have organized the evacuation of Logachevka, located on the Russia-Ukraine border to the east of the Ukrainian city of Kharkiv. “All residents of the village [of Logachevka] have been evacuated. Many went to their relatives. Those who have no one to go to - 27 people - were accommodated in Valuki,” local official Alexei Dybov wrote on Russian social media, adding that gas and electricity supplies to the village have been stopped.

Belgorod regional governor Vyacheslav Gladkov claimed earlier that one civilian died and several more were injured after Ukrainian troops opened fire at a border checkpoint near Logachevka. Gladkov announced on Monday that he had urged the remaining residents of Zhuravlevka and Nekhoteevka, two Russian border villages to the north of Kharkiv, to evacuate. “Today I went to Zhuravlevka to see for myself what the situation is. The situation at the settlement is difficult…” he said, according to Russian news outlet TASS. “We continue to try to convince people who still remain in Zhuravlevka and Nekhoteevka to temporarily leave their homes.”

It is unclear if Belgorod authorities intend to expand their evacuation efforts to include other settlements on or near the border amid unverified reports that several more locations, including Valuysky and Shelaevo, were struck this week. Gladkov alleged on Tuesday that Ukrainian forces shelled Zhuravlevka, damaging a school, recreational center, and administrative building. “The armed forces of Ukraine are shooting at an empty village, in which only elderly people from eighty to ninety years of age remain. Empty houses, empty school, empty administrative buildings. They have no goals other than to intimidate!” he wrote on his Telegram channel.

Ukrainian troops swept Russian-occupied territory in the Kharkiv region last week, dislodging Russian forces from their stronghold of Izyum and pushing them back to the northeastern border in some places.

Russian authorities have previously blamed Ukraine for purported strikes and acts of sabotage in the Belgorod area, including a claimed attack on an oil depot by two Ukrainian helicopters, reported instances of cross-border shelling, and ammunition depot explosions. Scores of civilians in border settlements have been evacuated in recent months to the city of Belgorod, the administrative center of the Belgorod region. Kyiv has consistently rejected claims that its forces have carried out attacks on Russian territory.