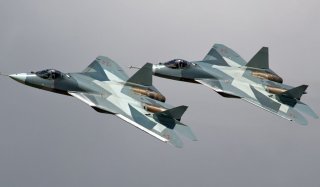 How many of the radar-evading planes the air arm acquires, and how quickly, are open questions. To say nothing of the type’s actual capabilities.

In any event, deliveries are good news for the air force. The Su-57 first flew in 2010. Sukhoi hand-built ten prototypes.

In 2018 and again in 2019, the Kremlin deployed pairs of Su-57s to Syria for what it claimed were combat trials, but there’s no evidence the fighters actually flew front-line missions.

Sukhoi had its work cut out for it even before the crash. It’s been a long time since the company has produced a plane of the Su-57’s complexity.

“Large-scale work awaits us in 2020 to stabilize the aircraft industry,” Sergey Chemezov, CEO of Sukhoi’s umbrella company, told state media in late 2019. “The first large-scale deliveries of the fifth-generation Su-57 aircraft will begin. Of course, these are challenging tasks that will truly mobilize us.”

Shortly following the 2018 deployment, the Kremlin suspended production of the Su-57 after the 28th copy, effectively canceling the program. However, Russian president Vladimir Putin dramatically revived the program in mid-2019, announcing a plan to buy an additional forty-eight copies.

A video that the Russian defense ministry released on March 24, 2020 appears to depict, for the first time, an Su-57 stealth fighter firing an air-to-air missile from one of its wing-root weapons bay. It was an apparent sign that testing of the type had advanced.

The four Su-57s the air force could receive in 2020 are the first examples from the seventy-six-plane production order. The production rate will have to accelerate if the Kremlin hopes to equip a meaningful number of front-line squadrons with the type before it becomes obsolete. At a delivery-rate of four planes per year, it could take three or four years to form one squadron.

And that was before the coronavirus pandemic weighed on the Russian economy. One Russian commentator at news-outlet VPK urged Moscow to consider curtailing Su-57 production in favor of the cheaper MiG-35 Fulcrum.

“In anticipation of budget cuts due to the low oil price and the crisis that will provoke the coronavirus pandemic, it makes sense to revise expensive fighter programs.”

“Instead of trying to make a dozen ‘gold’ Su-57s over the course of several years, you can replace the old Fulcrums with new MiG-35s with modern avionics, excellent weapons and the Zhuk radar with an active phased array. In addition, the MiG-35 has become more economical, which is also of great importance.”