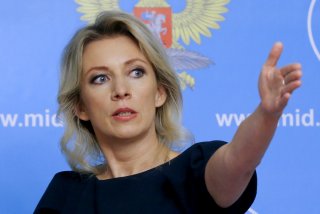 A Russian court fined two Russian activists who demonstrated in support of Afghan women on Friday, charging them with “violating public order” outside Afghanistan’s embassy in Moscow on Monday.

The two activists, Artemy Pityukov and Ksenia Bezdenezhnykh, were each fined 200,000 rubles, or roughly $2,700 a piece. The two activists, the only ones present at the protest, formed a “solitary picket” line, one of the few remaining forms of protest in Russia that does not require official authorization, according to the Russian newspaper the Moscow Times.

The same day, a similar protest took place in Saint Petersburg, but no arrests were made there.

Images of the small protest were shared on social media, including photos of one of the placards, which read, “Being a woman in Afghanistan is now deadly dangerous” in Russian.

While Moscow has largely welcomed the victory of the Taliban in Afghanistan’s twenty-year civil war—highlighting it as an example of the limitations of U.S. power and the alleged perfidy of the Biden administration—the Russian government has also recognized that women’s rights remain a major hurdle for good relations between the two countries.

Russian Foreign Ministry spokeswoman Maria Zakharova was cautiously optimistic about the Taliban’s stance on women’s rights, indicating that they had changed from the group’s last period of rule over Afghanistan from 1996 until 2001. During that time, women were forbidden to work, go to school, or leave their houses without the accompaniment of a male relative.

Corporal punishment and executions were very common during that period, prompting international outcry and largely relegating the Taliban to the status of a pariah state. During its first period of rule, only three countries—Pakistan, Saudi Arabia, and the United Arab Emirates—recognized its authority. Many other nations, including Russia, designated the group as a terrorist organization, a designation that Russia still maintains.

So far, no country has recognized the Taliban’s current rule over Afghanistan, although Pakistan is widely credited with having helped engineer it. Some regional countries, including Russia, China, and Iran, have indicated that they will pursue closer relations with the Taliban, while several Western ones, including Canada and the United Kingdom, have promised not to recognize the Taliban if it monopolizes power in the new government.

Russia has left its embassy intact in Kabul and has made a show of continuing business as usual there, even as the personnel of other embassies was evacuated.