The Taliban is Like the Khmer Rouge. Diplomacy Simply Won’t Cut It. 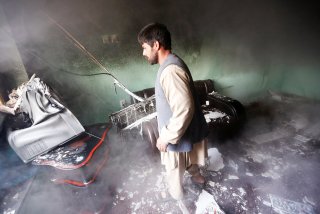 There is a certain smugness to American diplomacy. Policymakers often treat diplomacy as a panacea capable of resolving any problem, if only it was better-funded or more earnestly applied.

“You don’t make peace with your friends,” Secretary of State Hillary Clinton added. “You have to be willing to engage with your enemies if you expect to create a situation that ends an insurgency,” she stated at the beginning of her State Department tenure. Every administration tends to look at the failure of diplomacy with groups like the Taliban and other rogues as due more to the lack of will or ability of their predecessors than because of the ideology of the adversary.

The idea of negotiating with the Taliban is nothing new and, indeed, predates the September 11, 2001, terrorist attacks by several years. The Clinton administration, for example, talked to the Taliban on several dozen occasions up to and including a cabinet-level meeting between then-UN Ambassador Bill Richardson and Taliban foreign minister Wakil Ahmad Muttawakil.

President Donald Trump’s desire to end America’s overseas entanglements as well as domestic impatience at the length and expense of the U.S. mission in Afghanistan gave new impetus to negotiations. It was against this backdrop that Secretary of State Mike Pompeo appointed Zalmay Khalilzad, a former business partner to the Taliban and Bush-era UN ambassador, to be his special representative for Afghanistan reconciliation.

It was a curious title, given that Khalilzad sought to blacklist Afghan government officials who questioned how deferential the U.S. envoy had become empowering the Taliban diplomatically. Indeed, the State Department consistently appeared to treat the Taliban better than elected Afghan counterparts. Behind-the-scenes, Khalilzad argued that the Taliban had, since the previous period of U.S. diplomatic engagement with the group, become more nationalistic and willing to deal in good faith. There is little evidence, however, to support Khalilzad’s claims.

The U.S. State Department has so far spent tens of millions of dollars in pursuit of a Taliban peace deal. Khalilzad has likely become the most traveled diplomat in the State Department, logging more miles than the secretary of state. Khalilzad may never honestly assess his efforts. After all, special envoys tend to assess their portfolios through rose-colored glasses, and Khalilzad likes being the center of attention and likely fears that admission of failure would adversely impact his quest to eventually replace Pompeo.

Any dispassionate appraisal of the peace process with the Taliban so far shows it to be an abject failure. An intra-Afghan dialogue has not begun. U.S. intelligence found the Taliban never had any intention to abide by the agreement. The Taliban continued its terrorism against both Afghan civilians, the Afghan military, and U.S. bases.

History matters. Afghanistan’s history has been tumultuous, but the country has experienced periods of peace. In each case, however, it was conquest rather than conversation which brought calm. That does not mean that Afghanistan is impervious to diplomacy. Such reductionism is ridiculous. But it is important to acknowledge the country’s political culture. Consider, for example, the last period of intra-Afghan dialogue: In the wake of the fall of Najibullah’s communist regime, the United Nations tried to broker dialogue. The Taliban agreed not to try to take Kabul militarily and instead let talks run their course. Talks were ongoing when Taliban forces sacked Kabul, overran the UN compound, and hanged the former Afghan leader.

Afghan analysts make a number of historical analogies to help conceptualize what Afghanistan now faces. Some suggest it most useful to think about the Revolutionary Armed Forces of Colombia (FARC) and its decades-long battle with the Colombian government. Others suggest Vietnam, in which the United States peace talks led to communist North Vietnam’s take-over of its kleptocratic southern counterpart. The always insightful Hudson Institute scholar and former Pakistan ambassador to the United States Husain Haqqani brings up a third: the Taliban as Khmer Rouge.

Those who support continued diplomacy see a parallel in Colombian outreach to the FARC. Both the Taliban and FARC represented decades-long insurgencies. Both groups engaged in drug smuggling and other criminal enterprises. The analogy, however, falls flat in one important way: FARC gradually sheds its communist ideology and prioritized political power above any core philosophy. That is certainly not the case with the Taliban, which continues to embrace Islamist extremism.

There is also something to the Vietnam analogy. Corruption is rife within the elected Afghan government, just as it was in South Vietnam. That alone hemorrhages support among many Afghans, although their previous experience under the equally-corrupt pre-2001 Taliban government blunts the ability of the Taliban to promote themselves as a clean alternative. My own experience, traveling in both Afghan government-controlled areas and, pre-9/11, through the Taliban’s Islamic Emirate is an attitude of “the grass is greener on the other side” among Afghans, most of whom just wish to be left alone. The biggest similarity between the Vietnam and Afghanistan peace processes appears that they were largely unilateral: The Case-Church Amendment may have grabbed defeat from the jaws of victory by ending Pentagon intervention just as the Viet Cong faltered, just as the February 29 U.S.-Taliban Accord represents more a withdrawal agreement for U.S. forces than a plan for a comprehensive peace.

Regardless, the Vietnam analogy falls short in two important ways: First, while many scholars depict Ho Chi Minh as motivated more by nationalism than communism, the same cannot be true with regard to Taliban leaders who consistently subordinate Afghan nationalism to Pakistani concerns. Second, the analogy bodes poorly for diplomacy as fighting resumed shortly after the 1973 Paris Peace Accords, and Saigon fell just two years later. The only silver lining to the Vietnam analogy would be recognition that nationalism eventually triumphed over Marxism in Vietnam. There is little indication, however, that the Taliban embrace their own extremist ideology just to win external support; rather, it appears central and indivisible from their movement.

That brings us to the Khmer Rouge, the movement which conquered and ruled Cambodia between 1975 and 1979. Communism motivated the Khmer Rouge and Islamism motivates the Taliban. Thus, both groups shared many similarities. Both were brutal in their efforts to remake society. Both groups also were racist and ethno-supremacist. The Khmer Rouge, for example, disproportionately targeted ethnic Vietnamese, while the Taliban are especially brutal to Hazara and other non-Pashtun groups. Most importantly, neither the Taliban nor the Khmer Rouge shed their ideology after their fall from power. The Taliban remain just as committed to an Islamic emirate in which they would appoint a leader based on his religious credentials and belief to rule over society, and Taliban members would enforce an Islamic order as he demanded. Just as a U.S.-led invasion ended the rule of Mullah Omar’s first Islamic Emirate over Afghanistan, so too did a Vietnamese invasion end Khmer Rouge leader Pol Pot’s “Democratic Kampuchea.” Pol Pot fled into the mountains, where he continued both to direct insurgency and rebrand his movement in order to support among ordinary Cambodians. Until his 1998 capture by rebellious members of his own party, Pol Pot mandated that those living in territory he controlled along the Thai border embrace a peasant lifestyle, and his gangs confiscated private vehicles. Like the Khmer Rouge, the Taliban also engage in violence and reprisals against those resisting them. The Taliban recently have choked the supplies of goods and medicine in Uruzgan and Daikundi in part to punish populations that resist and resent their rule.

If the Taliban will not compromise, then the current peace process cannot succeed any more than negotiations with the Khmer Rouge could have blunted that group’s murderous ideology or ambitions. Americans may like to believe diplomacy can always succeed but there are certain movements for which that becomes wishful thinking. It may be time, then, to bring Khalilzad home and instead ask either whether the United States, India, Russia, and Iran are willing to accept a Taliban victory. What would that mean regionally? Would the Taliban ever be able to consolidate control? Would it destabilize Central Asian republics or even its longtime sponsor Pakistan? Alternately, if diplomacy cannot succeed, then it is time to step back and ask what the United States and other regional states can offer the Afghan government to ensure the Taliban cannot win. That might mean greater pressure on Pakistan, more frequent over-the-horizon military strikes not only against Taliban strongholds in Afghanistan but also on its safe-havens in Pakistan, or provision of new technologies and platforms to the Afghan government for use against the Taliban wherever they might be. Regardless, it is time for an honest conversation about Plan B, if Plan A—negotiations with the Taliban—cannot and does not work.