This Is How Pakistan Can Fulfill Its Promises to Afghanistan 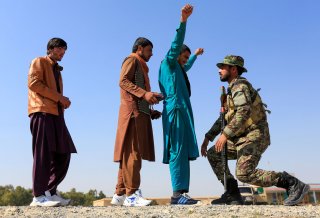 Earlier this month, Gen. Qamar Javed Bajwa, Pakistan’s army chief-of-staff, visited Kabul to meet both with President Ashraf Ghani and Abdullah Abdullah, the chairman of the High Council for National Reconciliation,  and the Afghan government’s point man on intra-Afghanistan negotiations with the Taliban. Inter-Services Intelligence (ISI) Director-General Lt. Gen. Faiz Hameed and Pakistan’s special envoy on Afghanistan Muhammad Sadiq accompanied Bajwa. According to a statement released by the Afghan presidency, Ghani and Bajwa agreed “the soil of either country should not be used against the other.”

Such a sentiment is laudable, but there has traditionally been a gulf between what Pakistani leaders promised to do in the interest of peace and what they actually did.

First and foremost, if Bajwa is serious, Pakistan should no longer allow its soil to be used as a safe-haven for Taliban leaders. After the September 11, 2001, terror attacks, the late Mulla Omar, founder of the Taliban, lived in Quetta and headed the so-called Quetta Shura. The Peshawar Shura has long supported the Haqqani Network, which supports Taliban operations in northern and eastern Afghanistan. The Haqqani Network also dominates the Miran Shah Shura, headquartered in Pakistan’s North Waziristan district. Pakistani authorities often counter that they too are victims of Islamist terrorism; that is true, but it does not excuse Pakistan hosting groups that sponsor similar bloodshed in Afghanistan. Nor does the Taliban gain any legitimacy when its leaders have lived longer in Pakistan than anywhere else. There is no getting around the fact that allowing Taliban leaders to live and plot terrorism from safe-havens in Quetta, Peshawar, and Miran Shah makes Bajwa’s promises empty. Special Envoy Zalmay Khalilzad’s failure to address Pakistan’s Taliban safe-havens directly may be the U.S.-Taliban deal’s most fatal flaw.

Pakistani authorities often say they deserve more credit than they receive in Western capitals because they have hosted millions of Afghan refugees for decades. In bilateral meetings, Pakistani officials often demand Afghanistan do more to catalyze refugee return. But, refugees will not return absent security, and so here Pakistan appears to be responsible for creating the Catch-22. Once again, until Pakistan ceases its support for the Taliban, it will never make progress on refugee return.

Taliban terrorism has killed thousands of Afghan civilians. The vast majority of explosives used by the Taliban in car bombs and other improvised explosive devices (IEDs) use precursor chemicals that come from two fertilizer plants in Pakistan. Even though Afghanistan long ago outlawed imports of ammonium nitrate, Pakistani border police regularly allow shipments to proceed without any real check. U.S. officials have long sought to monitor these shipments, but the Trump administration’s drawdown of forces has negatively impacted the Pentagon and intelligence community’s ability to do so and the problem remains ongoing. It is not enough to simply close safe-havens in their territory. If Pakistan wanted peace in Afghanistan—and if Khalilzad’s diplomacy is to be more substantive than symbolic—then Pakistan must stop exporting to the Taliban the means to build bombs.

Not every problem is military. For Afghanistan to be stable, its economy must wean itself off international assistance. Pakistan’s protectionism, however, is undercutting the ability of Afghanistan’s agricultural and manufacturing sectors to grow. Pakistan today allows only fifty trucks daily of Afghan produce across its border. This is a pittance for Pakistan, a country of more than two hundred million people, and it undercuts the ability of Afghan farmers to make an honest living without turning to narcotics or terrorism, both of which Pakistani authorities say they fear bleeding across the border. Once again, if Bajwa was serious and not simply lying for a diplomatic audience, opening up the Pakistani market to Afghan goods would help build neighborly, peaceful relations.

The ball is now in Islamabad’s court. It is time for Pakistan’s civilian government, and the military and ISI leadership which wield great influence over its policy, to recognize that the reason no one in Afghanistan and few in the international community take its diplomatic promises seriously is that the road map is clear to how to fulfill them, but Pakistan so far refuses to even start moving in the right direction.