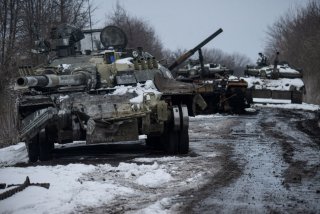 The Treasury Department announced on Monday that Russia would no longer be allowed to pay its debts in U.S. dollars held in American banks, a move that effectively made it impossible for the country to fulfill its international obligations and virtually guarantees a default in the near future.

The Treasury Department said that JPMorgan, the bank that Russia had planned to use to send out its estimated $600 million in foreign obligations on Monday, would not be allowed to process the payments. Although Russia has enough money to pay its creditors abroad, it appears to have no remaining mechanisms for doing so, as the country’s central bank was locked off from the international SWIFT bank transfer authentication system in the first days of Russia’s war on Ukraine. One economist estimated that the probability of Russia defaulting had gone up to 90 percent, according to Business Insider.

A debt default would make it far more difficult for Russia to secure foreign capital abroad, significantly raising the fees requested because of a perceived increase in risk. On the other hand, Russian isolation from the international economy would have comparatively little effect on global capital markets, from which it is already isolated.

The Treasury Department claimed in the early days of the Russo-Ukrainian war that it would continue to allow Russia to make payments on its foreign obligations from its frozen U.S. accounts, mostly in the form of Russian government bonds denominated in U.S. dollars and held abroad, although it forbade other transactions. However, after Russian troops massacred civilians in the Ukrainian city of Bucha, the Biden administration indicated that it would find additional ways to pressure the Kremlin to end the war, apparently leading to the loophole’s closure. To continue making its debt payments, Russia must use U.S. dollars held in Moscow and find a way to transfer them to the West independent of the SWIFT system and U.S. banks. It is unclear how Russia could accomplish this task.

The Russian government’s $600 million payment, now overdue by several days, is only a small part of the foreign obligations owed by the Kremlin. The country now has a thirty-day grace period in which to make the payment before it is officially considered to have defaulted. Prior to the new ban, Moscow had successfully made roughly $700 million in international payments, including a $117 million bond coupon payment in mid-March.