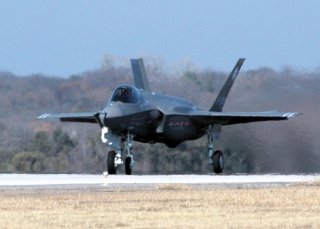 During the aggravation of tensions at the beginning of 2020 between the United States and Iran following the death of Iranian General Qasem Soleimania, Russia may have helped Iran identify and track stealth aircraft and hypersonic targets, Tass reported earlier this week. A Russian-made Rezonans-NE radar system sold to Iran had reportedly successfully spotted and tracked U.S. F-35 fighters near Iran's border in January.

"At the beginning of 2020 this radar identified U.S. F-35 planes and tracked them," Alexander Stuchilin, deputy CEO of the research center Rezonans, told the Russian state media outlet during this week's Army-2020 International Military Technical Forum.

Stuchilin added that the fifth-generation Joint Strike Fighters were reportedly tracked during "well-known events of the beginning of this year," a not so subtle reference to the days after the U.S. assassination of Soleimani in a drone strike in Baghdad, Iraq. Soleimani was commander of the Islamic Revolutionary Guard Corps' clandestine Quds Force.

The Rezonans-NE is a very high frequency (VHF) radar system that was designed to provide early warning against stealth aircraft and stealth cruise missiles as well as tracking and classification. The platform consists of up to four container housed antenna modules covering 90-degree in azimuth and operating independently.

Round the Clock Tracking

It is not a secret that Iran had acquired the radar technology from Russia. Russia had previously announced that contracts had been signed with a number of Middle Eastern countries to sell the Rezonans-NE platform. The maximum range of the over-the-horizon Rezonans-NE is 1,100 kilometers (684 miles), and it can track up to 500 targets. It is presently in service in Russia's Western Military District and the Northern Fleet while Algeria, Egypt and Iran are among the current foreign operators.

More recent reports suggested that the Rezonans-NE radar had been on "round-the-clock" combat duty in the Islamic Republic since at least last year.

"The radar's personnel were transmitting information, including the routes of F-35 flights, in clear, thus confirming that it was reliably tracking the planes," said Stuchilin. "For this reason, the opponent did not commit any irreparable actions that might have caused a big war."

This week the Israeli international news outlet i24News also cited a report from the Kuwaiti Al-Jarida newspaper, which claims that F-35 jets entered Iranian airspace earlier this month and may have reached Tehran before returning to a base in Afghanistan. The newspaper reported that sonic bombs were heard in the area of Tehran's international airport suggesting that the aircraft flew at a speed above that of sound.

The Israeli news organization also reported that Russian satellite monitoring may have filmed the jets' movement, but it is unclear if the Rezonans-NE radar platform was also employed to track the stealth aircraft.

Earlier this year the same Kuwaiti newspaper reported that Israeli F-35 fighters also conducted flights over Syrian and Iraqi airspace and flew into Iran, where they carried out reconnaissance missions. The F-35s were allegedly not detected by either Iranian or Russian radar bases in Syria—suggesting that the Rezonans-NE may not be as effective as its operators have suggested.

At the present time Israel is the only operator of the American-built F-35 Joint Strike Fighter. This month the second Israeli Air Force F-35I 'Adir' Squadron was officially declared operational.