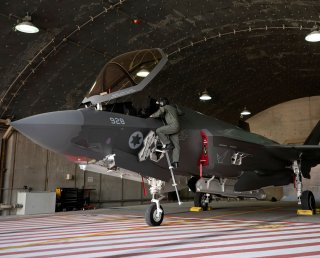 This week the second Israeli Air Force  F-35I “Adir” Squadron was officially declared operational, following a fitness inspection over the weekend. The 116th Lions of the South Squadron, which is based at Nevatim Air Base, will now take part in IAF operational activity.

Adir is the local name for the U.S.-built Lockheed Martin F-35 Lightning II, which means “Mighty One” in Hebrew. The Middle Eastern nation had previously announced that it would buy more than 100 F-35I fighters at an estimated cost of more than $5 billion to replace the IAF’s F-16s.

The F-35I models are broadly equivalent to the F-35A, but incorporate Israeli-made technology and weapons. In December 2016, Israel became the third country to receive its own F-35s.

The first nine of the advanced stealth aircraft became operational with the IAF in December 2017, and the IAF has announced plans to have twenty-seven F-35I Adir aircraft in its arsenal by this November and fifty by 2024 to complete two full squadrons.

Israel was the first country to use the F-35 in combat in early 2018, just months after the stealth fighter was declared operational. While Israel’s military did not confirm where the aircraft had its baptism of fire, it was believed to have occurred near or over Syria.

Before being officially announced as operational this past weekend, the 116th Squadron had been required to undergo a long process that included training on new procedures and planning of the squadron’s tactics. For the past six months, members of the squadron were met with the various scenarios that they were required to face and address as part of the preparation for the operational fitness inspection.

“The operational fitness inspection provides an official seal of approval for the operational capability of the 116th Squadron to carry out all the missions of the ‘Adir’ division,” Major Edi, the squadron’s technical officer told Defence-Blog. “The squadron’s tasks include its management during routine and periods of war, as well as maintaining functional continuity.”

As TheDrive reported, the IAF inaugurated the second squadron of F-35s this past January, and the unit gave up its previous “Defenders of the South” name and received the new title, “Lions of the South,” along with new tail art. The 116th Squadron was first activated in 1956 and was then known as the “Flying Wing Squadron,” and it initially flew American World War II vintage P-51D Mustangs at Tel Nof. The unit and its aircraft saw service during the Suez Crisis in the Sinai Campaign later that year.

Among the advanced Israeli-made hardware, the F-35I has an electronic warfare system that utilizes a plug-and-play feature added to the aircraft’s main computer for the use of Israeli electronics. In addition, the IAF is using its own version of the aircraft’s high-tech helmet-mounted display system, which itself costs upwards of $400,000. Whether that is a cost-cutting measure or just taking advantage of Israeli’s own tech industry is unclear, however.

At this time, the F-35I Adir is still the only F-35 variant to enter service heavily tailored to a foreign nation’s specifications.