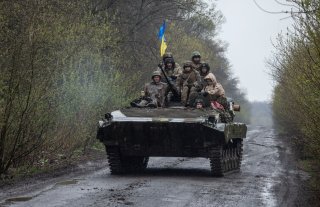 The Russian military is learning from its failures in northern Ukraine, according to a top U.S. defense official.

"What we have seen over the last few days is them continue to try to set the conditions," the official said in a phone call with reporters on Monday, as per CNN. "We call it shaping operations."

"It appears as if they are trying to learn from the failed lessons of the north where they didn't have proper sustainment capabilities in the area they were about to operate," the official said. The official added that the Russian military was seen moving heavy artillery, “command and control enablers,” and “aviation, particularly rotary aviation support” as part of its recent deployments in eastern and southern Ukraine.

Daniel Davis, a senior fellow at Defense Priorities who served in the U.S. Army, noted that in the war’s opening stages, Russia devoted too few troops to besieging a city as large and well-defended as Kyiv. As the war enters its second phase, the Kremlin is taking steps to reinforce Russian forces fighting in the country’s east. Russian and Russian-aligned separatist forces are widely believed to be on the brink of consolidating control over the southeastern port city of Mariupol, which would free up another twelve battalion tactical groups (BTG’s)—or as many as 12,000 troops—to participate in combat operations elsewhere in Ukraine. It was reported earlier this week that Russia has transferred about eleven BTGs to Ukraine in the past several days, bringing the total number of Russian BTGs in the country to seventy-six.

It was revealed in April that Russian president Vladimir Putin has tapped Gen. Alexander Dvornikov, acting commander of Russia’s Southern Military District and the leader of Russia’s military campaign in Syria, to serve as the top commander for Russian forces in Ukraine. Prior to Dvornikov’s appointment, there had not been a single commander responsible for all Russian troops taking part in the war. This change could streamline Russia’s chain of command, mitigating the apparent lack of cohesion exhibited by Russian forces in the war’s northern theater over the course of March.

Ukrainian officials confirmed this week that Russian forces have launched a major new offensive in the Donbas region. "Russian forces have started the battle for Donbas for which they've been preparing for a long time and a considerable amount of the Russian forces are concentrated and focused on that offensive," said Ukrainian president Volodymyr Zelenskyy in a video address on Monday. The Russian military’s immediate goal in the Donbas is apparently to encircle and destroy a pocket of up to 50,000 Ukrainian troops, considerably reducing Ukraine’s capability to contest large swathes of its eastern territories.