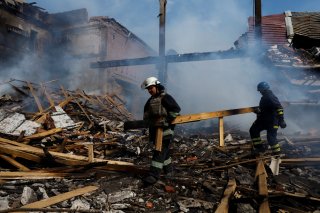 Video footage circulating on Russian social media channels showed Ukrainian power plants in Kharkiv and Dnipropetrovsk engulfed in flames. Ukrainian officials confirmed that the strikes lead to widespread electricity outages in parts of central and eastern Ukraine, affecting five regions in total. It is unclear how long the outages lasted and whether or not any of them are still ongoing. Deputy Head of the Office of the President of Ukraine, Kirill Timoshenko, warned that power outages may occur throughout all of Ukraine as a result of the strikes, adding that the attacks could also impact the supply of water. “Power outages can happen across the country. The Russians want to leave us without light, water and heat,” Timoshenko said, according to Russian news outlet Meduza.

The Kremlin has been under mounting pressure from hawkish politicians and commentators following its retreat from Kharkiv to produce positive battlefield results in Ukraine. The infrastructure strikes could signal a new round of escalation as the war enters its seventh month.

Ukrainian president Volodymyr Zelenskyy confirmed the Russian power grid strikes, framing them as a retaliatory move following the hasty withdrawal of Russian forces from northeastern Ukraine on the heels of a Ukrainian counteroffensive in the Kharkiv region. “Do you still think that we are one people? Do you still think that you can frighten us, break us, persuade us to make concessions? Did you really not understand anything?” he wrote. “Cold, hunger, darkness and thirst are not as scary and deadly for us as your friendship and brotherhood. But history will put everything in its place. And we will be with gas, light, water and food … and WITHOUT you!”

“Russia cannot fight on the battlefield, so it fights against civilians. Terrorist attack on Kharkiv CHPP on 9/11 – not the last strike on crucial infrastructure and an attempt to deprive people of heat/light,” presidential advisor Mikhailo Podolyak wrote on Twitter.

The Russian military called its Kharkiv withdrawal an “organized regrouping” and suggested it was a part of a battlefield maneuver to divert the attention of Ukrainian forces, according to the New Voice of Ukraine. “In the course of this operation a number of feints and distracting maneuvers were executed to disguise the real actions of the troops,” said the Russian Defense Ministry.