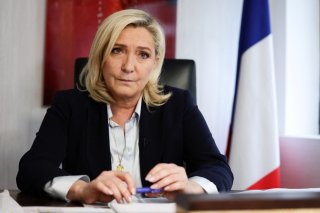 Marine Le Pen, the leader of France’s far-right National Rally party, vowed on Wednesday that she would withdraw France from the military command of NATO and promote a rapprochement with Russia if elected in the country’s upcoming presidential vote.

The French politician also argued that France should not be subordinated to NATO’s interests, arguing that the country is a major world power in its own right. “France is not a middle nation, but a big power that counts,” she claimed, comparing her vision of an independent foreign policy with incumbent president Emmanuel Macron’s, which she argued had been subordinated to the interests of other European elites.

Prior to Russia’s invasion of Ukraine, Le Pen had repeatedly praised Russian leader Vladimir Putin, characterizing him as a defender of traditional values against the Western Left. In her remarks on Wednesday, she argued that her critics had “misjudged” her previous statements, adding that she had French interests at heart. She also pledged to call for a “strategic rapprochement between NATO and Russia” after the end of Russia’s invasion of Ukraine, defending closer ties with Russia as a way to keep Moscow at arm’s length from China—a strategy that many Western observers have criticized as unrealistic.

Le Pen vowed that she would withdraw France from NATO’s military command if elected, characterizing it as an “American protectorate,” although she stressed that Paris would continue to adhere to Article V of the treaty, which provides for collective defense.

France’s runoff election, scheduled to take place on April 24, pits Le Pen against Macron, a centrist pro-European whose leadership has come under sharp criticism in recent years from both the Left and the Right. In recent days, Macron’s campaign has hit back against Le Pen for her remarks on Russia, arguing that she would function as an “ally of Putin” if elected.

Le Pen is the daughter of Jean-Marie Le Pen, who led the National Front, the National Rally’s predecessor party, from its founding in 1972 until his resignation in 2011. The elder Le Pen ran for the presidency five times on a hard-right platform, making the runoff in 2002. In that election, he was subsequently annihilated by incumbent president Jacques Chirac, who received 82 percent of the vote, the largest margin of victory in French history.

The upcoming election is a rematch between Le Pen and Macron, who defeated her in 2017 with 66 percent of the vote.