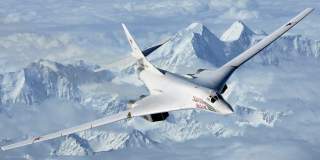 The Tu-160 is a Soviet nuclear-capable bomber, travelling at maximum and cruise speeds of 2,220 and 960 kilometers per hour respectively, and boasting a flight range of around 12,000 kilometers depending on payload. The Blackjack is due for a modernization later this year with the upcoming Tu-160M2 variant, promising a more fuel-efficient NK-32 02 engine and upgraded avionics suite.

As opposed to many of the prior disputes that arose over Russian aircraft flying in close proximity to North America, both parties generally agree on the facts. TASS, a Russian state news outlet, cited a statement provided to them by NORAD’s press office: “An E-3 Airborne Warning and Control System, two F-22, two CF-18 fighter jets from North American Aerospace Defense Command positively identified two Russian Tu-160 Blackjack strategic bombers entering the Canadian Air Defense Identification Zone on January 26, 2019. Bombers remained in international airspace and did not enter sovereign territory.”

The Russian Ministry of Defense does not dispute the statement, only adding that the Tu-160’s were on a scheduled, fifteen-hour exercise flight to practice refueling routines. The Russian Ministry of Defense later published footage of the flight, which took the two Tu-160’s across the Barents, Laptev, and Kara seas. The disagreement, if any, is more semantical than concrete: Russian sources insist that the interception occurred in the “Arctic,” while U.S. headlines prefer the “North American coastline.”

When considered in isolation, this appears as a relatively mundane exercise held in international airspace; likewise, interceptions and escort flights are a common feature of ADIZ enforcement.

Even so, it strains credulity that the Russian Air Force (VKS) did not anticipate a public response from flying a pair of strategic bombers so close to North American airspace. On the contrary, the flight was likely intended as a statement about Russian power projection capability. Canada has recently expanded its ADIZ further into the Arctic, a move that could not have escaped the attention of a Russian strategic establishment actively seeking to proliferate their influence in that region. As one of Russia’s principal nuclear-deterrence bombers capable of delivering a “doomsday” payload of nuclear-tipped cruise missiles, the Blackjack occupies an essential place in the air leg of Russia’s nuclear triad and comprises one of the Kremlin’s favorite nuclear saber-rattling tools.

Only last month, Russia sent two Tu-160’s to Venezuela amid a sharp downturn in relations between Washington and Caracas. At around the same time, Russian state news reported that Moscow’s military experts were actively exploring the prospect of establishing a formal, permanent bomber base in Venezuela.

For a sense of geographical perspective, this would place Miami well within hypothetical striking range of a nuclear missile-armed Tu-160 flying from Caracas. In the likely chance that such a base never materializes, even the mere threat of its existence provides Russia with a bargaining chip in ongoing arms control talks. Such flights are also useful for military contingency planning; that is, they act as trial balloons to test the speed and scale of NORAD’s response at various aerial points of entry.