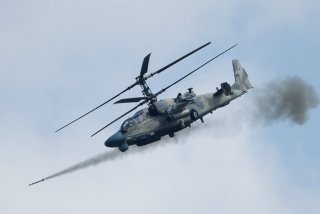 In the initial weeks of the war in Ukraine, Russia’s heavy missile and artillery bombardment of Ukrainian civilian areas revealed what appeared to be a deliberate effort to terrorize the Ukrainian people.

What makes this all the more disturbing is the reality that Russia has precision-guided weapons and, should it wish to, could easily pinpoint military targets with surgical bomb and missile strikes. Therefore, the attacks on civilians appeared to be quite deliberate right from the start, given that Russia has the technical means to limit casualties.

Precision-guided artillery and GPS-guided land missiles, for example, have existed since 2007, when the Army fired Excalibur GPS-guided artillery shells, which were able to pinpoint exact targets from thirty kilometers away. Of course, Russia has its own arsenal of equivalent precision munitions, which not only give commanders more options and enable precise strikes, but also offer the possibility of launching extremely effective attacks without “having” to kill civilians and destroy the infrastructure of the attacked country.

However, the Pentagon now says Russia is running out of precision munitions due to the overwhelming number of strikes Russian forces have launched.

“There has been an effect on Putin's ability to restock and resupply particularly … in the realm of components to some of his systems and his precision-guided munitions. … They've already faced an issue in terms of replenishing their inventories because of components to some of those systems, and that's already had a practical effect on Putin,” a senior Pentagon official told reporters on April 18.

This dwindling supply of precision weaponry is merely one of a handful of now well-known supply problems encountered by the Russian military, which has seemed rather ill equipped to manage the kind of conflict currently unfolding in Ukraine.

A lack of precision weaponry could greatly impede Russia’s ability to advance into and take over Ukrainian territory. Russian forces will be able to indiscriminately launch unguided artillery bombardment attacks, but they will not be able to pinpoint high value Ukrainian targets, such as headquarters buildings, command and control centers or troop concentrations. This could make it very difficult to advance into well-defended Ukrainian territory.

Russia will likely have little to no ability to disrupt Ukrainian command and control if it can’t hit critical targets with precision weaponry. Ukraine, however, is getting a significant number of Howitzer artillery systems, which may arrive with an ability to fire precision rounds. If that is the case, Ukrainian defenders will be able to use drones to see where approaching Russian forces are and attack them with precision. Such an imbalance in precision strike capabilities could greatly favor the Ukrainians, forcing Russia to mass high-risk linear mechanized assaults on entrenched Ukrainian soldiers who are ready to defend their homeland.