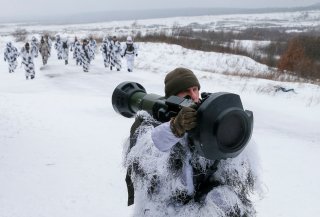 Ukrainian fighters are now widely known to be effective against Russian forces. The much-discussed Russian vehicle convoy, which has yet to reach Kyiv, may have been slowed down considerably by Ukraine’s enterprising tactics. Some of these include staging hit-and-run ambushes, which allow Ukrainian forces to strike advancing Russian forces when they are more vulnerable at key choke points. Using their knowledge of the terrain to their advantage, Ukrainian fighters are also attacking the Russian convoy with anti-armor weapons.

In coordination with these efforts, the Ukrainians have also been employing additional tactics to find and destroy Russian supply lines and equipment. “They’re not simply going after combat capability—tanks and armored vehicles and shooting down aircraft. Although they’re doing all that, they are also deliberately trying to impede and prevent the Russians’ ability to sustain themselves,” a senior Pentagon official said on Monday.

For weeks now, the Pentagon has been clear that the Russians are experiencing fuel, food, and supply shortages, as well as serious morale problems. Perhaps these sustainment problems were not accurately anticipated in Putin’s war plan? Or, as suggested by the Pentagon official, perhaps deliberate Ukrainian tactics are identifying and destroying supply areas behind the front lines. Once the location of supply lines is found by Ukrainian forces, they can be attacked in an optimal way depending on Ukrainian intelligence and the available manpower and weapons.

Given how well Ukrainian forces know the roads and cities throughout their homeland, Ukrainian fighters may know specific areas to hide in anticipation of a Russian convoy. This may allow them to ambush the supply lines once the main armored attack weapons have passed by, leaving the trailing supply areas extremely vulnerable to attack.