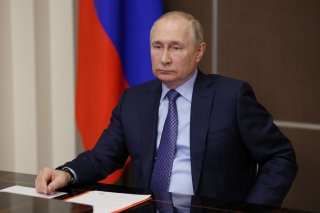 In a pivot from Russian president Vladimir Putin’s fiery comments in recent weeks, Russia’s Ministry of Foreign Affairs on Wednesday asserted that avoiding a nuclear clash between the world’s nuclear powers is its top priority, according to a new Reuters report.

The ministry added in its statement that it feared the five declared nuclear powers were teetering “on the brink of a direct armed conflict” and that the West needs to immediately stop “encouraging provocations with weapons of mass destruction, which can lead to catastrophic consequences.”

“We are strongly convinced that in the current complicated and turbulent situation, caused by irresponsible and impudent actions aimed at undermining our national security, the most immediate task is to avoid any military clash of nuclear powers,” the statement continued, adding that a nuclear war “cannot be won and must never be fought.”

Moscow also noted that it stood by a joint declaration in January that was issued together with the United States, China, Britain, and France reaffirming their responsibility for avoiding a nuclear war.

Amid a series of humiliating military setbacks in Ukraine in recent weeks, Putin has repeatedly threatened to use his vast nuclear arsenal.

In a speech in September announcing the mobilization of hundreds of thousands of troops to fight in Ukraine, Putin said Moscow was prepared to use nuclear weapons if Russia’s “territorial integrity” was threatened and “we will certainly use all the means at our disposal.”

International concern was also ramped up last month when Russia claimed that Ukraine could detonate a “dirty bomb” in an effort to frame Moscow—an allegation dismissed by both Ukraine and Western defense chiefs. A “dirty bomb” can be broadly defined as a conventional explosive with added radiological material, according to the Center for Arms Control and Non-Proliferation.

The Ministry of Foreign Affairs said that it would only use a nuclear weapon “in response to an aggression involving the use of weapons of mass destruction or an aggression with the use of conventional weapons when the very existence of the state is in jeopardy.”

“We urge other states of the ‘nuclear five’ to demonstrate in practice their willingness to work on solving this top-priority task and to give up the dangerous attempts to infringe on vital interests of each other while balancing on the brink of a direct armed conflict and encouraging provocations with weapons of mass destruction, which can lead to catastrophic consequences,” it continued.

Russia boasts the largest nuclear arsenal in the world with nearly 6,000 nuclear warheads and 1,500 of them currently deployed, according to the Stockholm International Peace Research Institute.